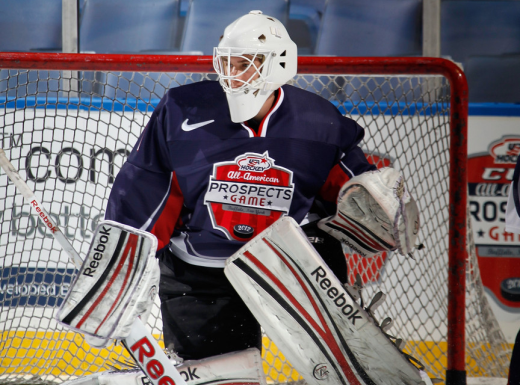 Playing the first half of the game for the blue-clad Team Housley, McAdam conceded three goals on 14 shots (unofficially) and was the goalie of record, but his stat line doesn't deliver an appropriate level of complexity. The first goal past McAdam was scored by Hudson Fasching, a National Team Development Program player who will oppose PSU in the Big Ten as a member of the Minnesota Golden Gophers in 2013. On a three-on-one, Fasching charged to the back-door post to McAdam's left, and put home a beautiful setup from Fitzgerald with 4:06 remaining in the opening period.

Fasching was a frequent nemesis for the big Perkasie, PA native. He almost added a second goal immediately after the first but hit the short-side pipe off left wing. McAdam did get the better of the duel a couple times, including a sparkling toe save seven minutes into the game to pass his first true test.

Seth Jones, a defenseman projected by many to be the top pick in next June's draft, beat McAdam from right point off the draw through a moderate amount of traffic 6:06 into the second period. As with Fasching, McAdam did manage a couple of quality saves on the son of former NBAer Popeye Jones, including a glove effort in the last minute of the first period. McAdam's last act in the game was a stop on a deflected Jones point shot.

The final goal against was scored by Nebraska-Omaha commit Jacob Montgomery, who caught Team Housley's defense napping and was able to split them while receiving a feed from Jimmy Lodge. Montgomery then put some lethal hands on display by dangling McAdam out of position.

Prior to his final four minutes, the Penn Stater put together a very strong effort. He demonstrated quick reflexes five minutes into the second period on a save of a sneaky effort by Denver freshman Quentin Shore from the slot. Just prior to that, his lateral quickness, particularly for his size, was up to par in moving to his left to deny Shore's attempt at a puck that rebounded off the end boards. In the first period, McAdam made a big save on a 2-on-1, as Montgomery attempted to finish a pass from Cole Cassels (the son of former Hartford Whaler Andrew Cassels).

In an interesting side story, Team McClanahan's netminder for the first half of the game was Cal Petersen. Petersen is McAdam's Waterloo Black Hawks teammate and someone who now owns some form of bragging rights over his goaltending partner, as he shut out Team Housley over his 30 minutes.

The game was attended by a reported 150 NHL scouts, who undoubtedly have a lot of new material to take home on McAdam and the other 39 participants.
Posted by Kyle Rossi at 9:31 PM