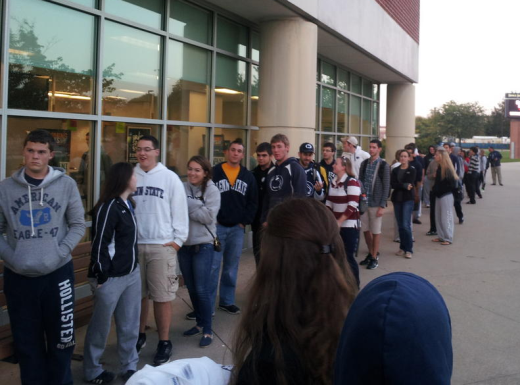 At established NCAA Division I powers like Cornell, waiting in line for student tickets is a tradition, a rite of passage and a source of pride, both individually and collectively. Penn State's not quite on that level yet obviously, but the school did offer what may someday be considered the start of something huge Wednesday morning at 7:00 a.m.

Penn State law student Aaron Griffin, who knows a thing or two about hockey ticket lines thanks to his degree from Cornell, kept the world updated on the first-ever Penn State Hockey Line via his Twitter account. By the way, Aaron's a first-rate follow if you like chatting about hockey at either of his two schools (I don't think assuming you like chatting about at least one of them is a huge reach if you're here), so get on that.

He arrived at the Bryce Jordan Center ticket office at 5:30 a.m. and reported as follows...

6:33 a.m.: Appear to be technical difficulties inside.

6:57 a.m.: Getting trashtalk from JoeBa about my Cornell sweatshirt was the highlight of my day.

Okay, so it's wasn't exactly glamorous (although Gadowsky did bring donuts, so there's that), and no, there wasn't really much to do beyond counting and tweeting, but we'll get there. Cornell certainly did:


By Sunday afternoon, the Ramin Room in Bartels Hall looked like the living quarters of most students across campus: pizza boxes and takeout bags overflowed from trash cans; pillows and blankets were thrown every which way; extension cords snaked across the artificial turf from outlets to laptop computers and a single TV, where a group played Madden. From 10 p.m. Saturday until 6 p.m. Sunday, more than 1,200 Cornell students called the Ramin Room home, sleeping, eating and living in The Line for the chance to buy hockey season tickets.