I debated whether to headline Murphy on this week's entry reserved for the women's YouTube countdown since I also popped her in below for something else, but I couldn't help it, because we have something very important in common. Third question, if you really need to know (it violates a self-imposed TYT rule to directly say it).

In a somewhat under-the-radar story, intercollegiate athletics pulled $25 million from plans to upgrade the extremely-dated McCoy Natatorium and add to the tennis facilities. The student-run committee responsible for spending the facilities fee charged to each University Park student quickly responded by removing their $30 million from the equation as well. The stated reason for the athletic department's move was, in fact, the NCAA sanctions.

This situation illustrates precisely why I'm still keeping my eyes and ears open for potential impacts of the sanctions on hockey despite the party line, which is to point out that the consent decree with the NCAA doesn't allow cuts from non-football sports. The athletic department in this case isn't chipping directly at the swimming and diving teams' budgets, but at the facilities budget, so it's not a violation. I'm fairly certain that those teams aren't particularly happy about this news, though - it surely hurts them from a competitive standpoint, as McCoy is already well below par compared with peer institutions. The bottom line, the reason I included this, is that this illustrates how the consent decree is not ironclad protection for non-revenue sports.

It's interesting...if you had asked me before all of this whether I'd rather have $102 million for hockey from one guy or $102 million for hockey from, say, 50 guys, I would have taken the second option every single time. It's not that I'm not grateful to the Pegula family, of course I am. This blog is named after my gratitude. Terry Pegula, while I don't know him personally, seems as if he has a sincere desire to use his vast fortune to grow the sport of hockey for the right reasons (obviously, there's plenty of evidence of that well beyond State College). He's engaged in the fruits of his generosity, but only as a matter of interest - I don't see him as a micromanager, the type of donor who would call up Joe Battista to demand that someone be fired. I'm just generally wary of being indebted for life to one single guy who, as a result, has largely unchecked power over the program, regardless of that guy's identity.

That said, I've now come around to thinking it's beneficial to have that one guy, at least at this particular moment in history. While the power that Pegula holds can very easily be detrimental under a different set of circumstances, it's reality that just about every athletics and facilities expenditure is under intense scrutiny right now. In that climate, I think it's vital that hockey has an extremely high-profile (largest private donation in Penn State history, celebrity stemming from his ownership of the Buffalo Sabres) backer capable of scaring Dave Joyner and cronies away from harming hockey in a way not possible from fifty $2 million donors - who are also not of one mind and would likely be split on something like repurposing their donations from "hockey only" to "general" if asked. It's not off-the-map crazy to suggest that a hypothetical involving more evenly-distributed donations would have resulted in abandonment of NCAA hockey at Penn State shortly after last November.

PSU law student Aaron Griffin, who immortalized himself as the sixth person to ever buy student tickets for NCAA hockey at Penn State, assembled this unreal primer on the opposition this season. I'm going to eventually type a lot of words about these teams, but if a picture is worth a thousand words, then a five-minute video is worth...I don't know, probably more words than I'll have for you.

Hey, remember that time Terry and Kim Pegula donated $88 million (at the time) to Penn State to build an arena and endow scholarships so that the men's and women's ACHA programs could elevate to NCAA Division I? Of course you do, especially since I've already discussed it in this post. Remember how they were given customized Icers jerseys at the press conference on September 17, 2010? 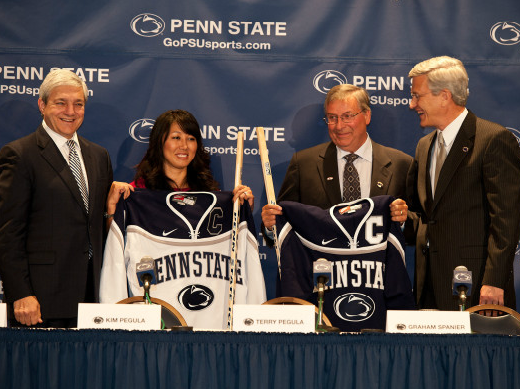 Well, the white one is in good hands, those of Terry's and Kim's daughter Kelly. I wonder if Jessie has the blue one.

I'm not going to link every opinion out there concerning the new jerseys, but this one was more detailed than most, and also provides counterpoint to my own opinion.

The TPS guys, before you get too mad at them over this, have been absolutely fantastic to the Penn State program so far, including an hour-long studio appearance by Guy Gadowsky in July and previous interviews of both Gadowsky and freshman forward Reed Linaker. This post still counts as good publicity as well.

This jersey opinion from Chris Peters generally reflects the non-PSU consensus in my observation: simple, sharp and classy, although maybe a little boring. He did toss in a couple of curious comments, though.


The one deviation from traditional hockey jerseys is the smaller numbering resting a little higher than normal on the shoulders, which is an interesting look. We’ll see how that shows up on the broadcast (As a part-time broadcaster, shoulder/sleeve numbers are crucial to identify unfamiliar players).

The placement of the so-called "TV numbers" is due to the structure of Nike hockey jerseys - one would think that Peters would have noticed that as a guy blogging about Nike-outfitted USA Hockey. Observe:


As you can see, there's sort of a wedge-shaped area right at the shoulder junction which, due to the way the jerseys are put together, is the best, most convenient place for those numbers. It also limits their size to the space between the top and bottom seams (looking at the edges of the numbers in relation to those seams above, PSU's numbers may be smaller than others, but not by much at all if that's even the case). These weren't design choices made by Penn State out of the blue, and the placement is certainly something Peters should have seen before in his part-time broadcast work (you can almost see him huffing his own fumes as he dropped that parenthetical in, because FastHockey is just like NBC).


While the “We Are Still Penn State” signs might make you (and me) a little squeamish...

Wait, hold up Chris...I thought we were talking about hockey jerseys, not what you ridiculously labeled the "Sandusky-Paterno" scandal and your uninformed opinion of our reaction to it. Stick to fluffing NTDPers and Ryan Kesler while receiving entirely too much credit for it bud. Actually, you can keep being a hack if you want, that's ultimately not my concern, but at the very least, maybe you should try digging a little deeper into the hack toolbox than "express disapproval of Penn State in an unrelated story to try to win over the audience and generate clicks...and make sure you sneak the name 'Paterno' in as well." That one's been dulled from overuse.


Both of those...views are wrong.

Well, they're opinions, so they can't really be wrong...but yeah, yours are anyway.* 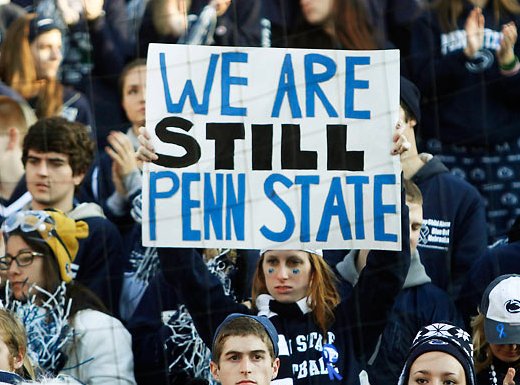 * Yes, I know that last quote is well out of context. In fact, it's from an entirely different subsection of the post.

The women's team enjoys conditioning sessions enough to pose for team photos to commemorate them. Really nothing not to like about this group. 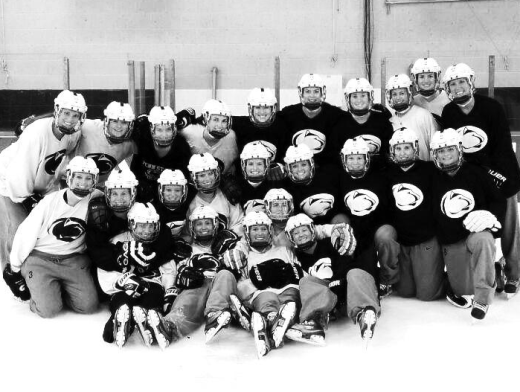 Speaking of the Lady Icers Nittany Lions women, Katie Murphy and Lindsay Reihl had a little skate baking party Thursday night (for those who don't know, baking new skates helps break them in so that they fit better, and look good, feel good, play good). Of course, skate baking parties are a lot more fun when you're working with these: 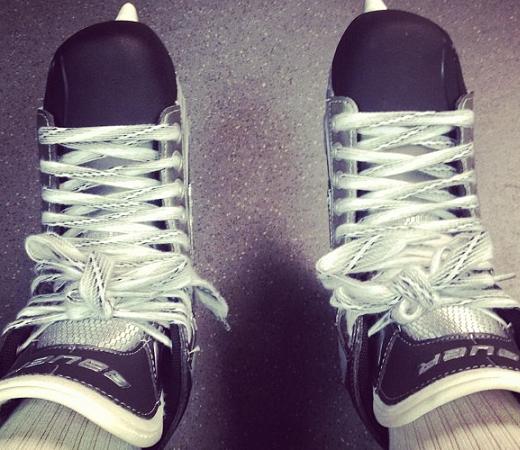 Understandably, the powers that be in Division III are concerned with the lengthening of the season required to play their national championship game on the Friday of the Division I Frozen Four weekend. That said, figure it out, because the proposal, which would be effective with the 2014 event in Philadelphia, is a fantastic idea.

There's probably no need to click through, as PSU gets completely skunked on the preseason CHA awards here. Well, unless you want to learn about some of the top players elsewhere in the league I guess.

Matt Turner will bring his sick mask to the Ice Pavilion on October 5th to face the ACHA's Ice Lions. And Derek Meluzio will bring his sick goalie previews to Penn State in the near future to give us a first look at what the troika on the Nittany Lions roster will be wearing.

I struggled with the decision to share this because of how completely amateurish they make my PIA photos appear, but holding it back would have only cubed my amateurishness factor, right? Oh well, some country station gets access to the site that I don't for whatever reason. I'll survive. Here's a taste of what the link offers: 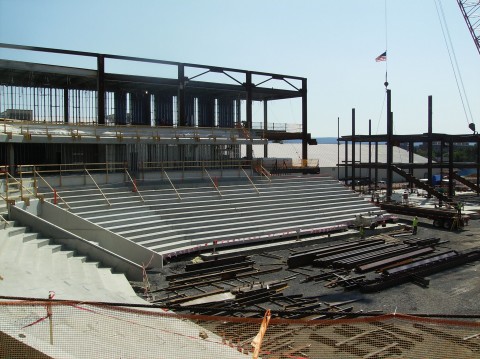