3. An NHL lockout survival guide: Where can Philadelphia hockey fans get their fix?
(Broad Street Hockey)

BSH, which I probably don't need to plug because it's about 800 billion times bigger than TYT, is an absolutely unreal Flyers blog on the SBNation network, which is also home to Penn State's Black Shoe Diaries. We sort of crossed paths on a limited basis last winter when they were my best source for keeping up with the development of the Winter Classic rink at Citizens Bank Park, a shared interest of course. Now, with an NHL lockout looming, we might have something in common once again. Here's their guide to non-NHL hockey with a Philly slant, including a mention of Penn State.

Full disclosure, which I feel like I have to drop whenever talking about PA's NHL teams: I have a favorite NHL team. It's not the Penguins or Flyers, although I do prefer one to the other (hey, you have to take sides on that if you went to Penn State). It's also not the Sabres, although I certainly keep an eye on how they're doing, for obvious reasons.

As the headline indicates, all is going pretty well with the PIA. Notable details include the installation of some of the exterior brick, glass and metal scheduled for now-ish, while the roof should be complete by the end of football season to allow work on the inside through the winter.

I do think the Collegian whiffed on the real story here though:

Sports info is doing a fantastic job on the women's team so far this year (don't get me going on the history thing or my needing Rob Reihl, senior defender Lindsay's father, to tweet updates from games last year though). Part of that effort has been the release of video introductions of team members.

I went with Yox - I assume people call freshman forward Shannon Yoxheimer that, since it's awesome - as the headliner because she represents the D and has family in Hudson, OH, two municipalities south of my hometown of Solon. I delivered pizzas in Hudson one summer, although I probably didn't meet Aunt Bonnie because I blew off work a lot. I can promise that I didn't deliver the pizza on her counter. Also, Sarah Wilkie makes a cameo, and I talked to her one time. I think those are all legit reasons.

Beyond Yoxheimer, there have been and will be videos featuring other players. So far, the collection includes:

By the way, if you watch the "meet" videos, you may notice that we're being trolled pretty hard with respect to the new jerseys.


Blue, white collar, tie down, nothing on the shoulder. Given that the collar on the blue version of the previous jersey was grey, and that said jerseys were not made by Nike... 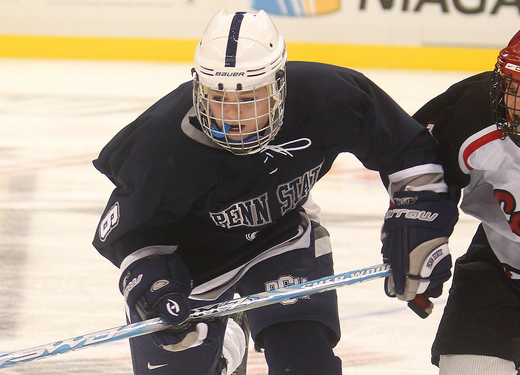 ...yeah, those are definitely the new ones. So far, so good.

As most of you are surely know by now, student-athletes from each of Penn State's varsity teams were part of the on-field festivities prior to football's season opener Saturday. For capturing and sharing a photo of the women's hockey team outside of Beaver Stadium just prior to the ceremony, Rob Reihl gets a second mention in this post. Significantly, it's the first public photo of the entire inaugural NCAA team (to the best of my knowledge).


If you prefer, he also took one inside the stadium with everyone wearing their sick team-issue gear. Which reminds me...serious question - is there a place where I can get a t-shirt specific to women's hockey without asking a player to steal one for me? I know they've had Lady Icers gear at games in the past, but I imagine that's probably off the table now. Comment below if you got the hook up.

I'm never one to pass on an Eamon McAdam write-up or a compliment, and this StP post has both.

McAdam, of course, will play in the CCM/USA Hockey Prospects game in Buffalo on September 29th while wearing one of these. Eesh.

If you're anything like me, headlines like this scare the crap out of you these days. No need to worry though - Arizona coach Sean Hogan is only talking about PSU's hockey program, and the fact that three ACHA programs are getting six shots at taking down an NCAA DI team this year. Nice.

Mr. Grasso, who looks like Pat Kane's much younger brother, is an apparent recruiting miss for PSU as he selected the University of No Hardware (hey, I don't make this stuff up, I just go with it when appropriate) over Penn State and several others.

The CHA champs have added Ashley Harper to the coaching staff as a volunteer assistant, after she served as RMU's hockey operations manager for 2011-2012.

Paul Kelly has finally been permanently replaced after six months, with a guy who believes that "at the core, this job is about educating, and making sure a family that's going to make [the decision between college and major junior], whatever decision they make, they can make the best decision."

The unfortunate thing, I suppose, is that CHI really has very little power to do anything but go around telling people what they already know.

CHN hits the rare double with some analysis of the chances for a new NHL-NHLPA collective bargaining agreement to help college hockey with its major junior/professional defection issue (the headline sorta gives away their position, but it's still a worthwhile read).

It's entirely possible that ice rinks are like tattoos for billionaires (not like I'd know, I'm barely a hundredaire). At the very least, it certainly seems that way in the case of Terry Pegula, who won a bid to build two (more) of them near the Sabres' home First Niagara Center, along with a hotel, restaurants and retail space.

I'm not sure why I'm admitting to this, but the first time I watched the Hershey Bears' video introducing their new look last Wednesday, the hilariousness of the whole thing flew right over my head (mostly because I was like "yeah, history, chocolate...got it, get to the logo already"). Then Travis Hughes of BSH got my head in the right place, to the point where I would say "WE ARE ALSO BEARS" and start giggling for the duration of the evening.

Speaking of central PA hockey that isn't PSU, nice get for the Tomahawks. And now that I've tied the Pens into this post in a way not involving a snarky joke, Weaver and Cara Mendelson don't have to kill me. 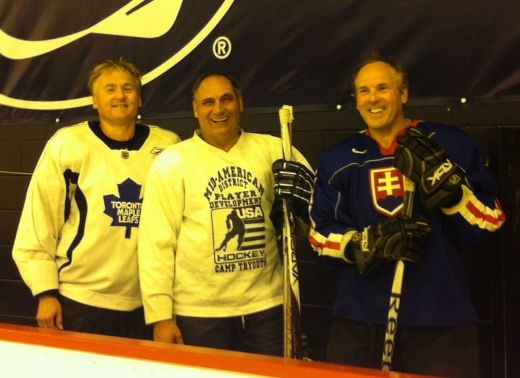 In case you didn't believe the whole JoeBa-mustache story, here you go. He's flanked by Mark (left) and Tom (right) Horgas, two key figures in early Icers history. In 1979-1980, Mark coached an Icers team featuring both his brother - the team's leading scorer that season - and Battista to the MACHC title. Here's some background on the conference tournament championship series against Villanova that year:


There's an interesting footnote to the story involving former VU coach Skip Probst, who doubled as MACHC president. After his team lost out the league title, Probst falsely claimed that Tom Horgas was an ineligible player, unilaterally stripped PSU of the championship, and even submitted the team's record to a hockey guidebook as 0-12-0. Not surprisingly, that was the Icers' final year in the conference.

Despite Probst's pettiness and long story short, PSU's won-lost mark that season is still counted as 18-5-0 in the team's records and a banner marking that championship still flies in the Ice Pavilion. Basically, the Icers of that day had more stones than Rod Erickson and the Board of Trustees.
Posted by Kyle Rossi at 2:39 AM