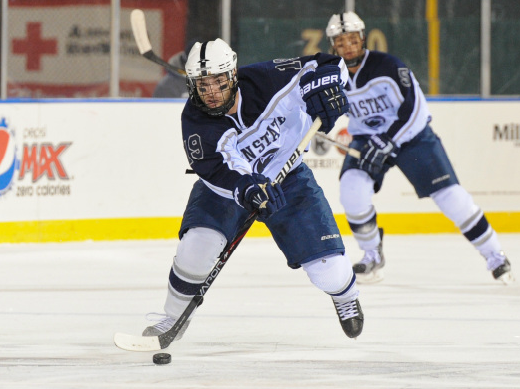 Last month, former Lady Icers Cara Mendelson and Katie Murphy were rewarded for a summer of hard work with spots on the inaugural women's NCAA team. Now, the men's team has also made a late addition in the form of former Icers forward Dominic Morrone.

Morrone was in a similar position as Mendelson and Murphy, in that he was left off of the initial 2012-2013 roster announcements, but was given the team workouts in order to stay prepared for the possibility of...well, this. Evidently, he has satisfied whatever concerns led to his exclusion and will join 15 other Icers in varsity play this season.

While the New Jersey native can be a chirp artist's dream at times (his hotheadedness did improve last season in my assessment), Morrone has also been a tremendously productive offensive player. The former Boston Jr. Bruin put up 77 points in his first two seasons before slumping a little bit last year, with seven goals and 16 assists in 27 games. After skating on a good early-season line with once-again teammates Jake Friedman and Bryce Johnson, Johnson's broken thumb suffered December 9th of last year threw things into flux and probably hurt Morrone indirectly.

Despite that, he bounced back to be involved in the defining moments of the Icers' last-ever win, over Oklahoma at the ACHA National Tournament. With Sooner goalie Nick Holmes serving a major penalty following his altercation with Justin Kirchhevel at the end of the second period, Morrone and Tommy Olczyk took turns assisting each other in the first 61 seconds of the third period against cold backup Colin Fernandes. Those two goals broke a 3-3 tie as PSU went on to win 6-3.