Brandwene's crew doesn't play an official game until next Saturday at Vermont, but three of Penn State's CHA rivals already have a contests on their regular season records, thanks to a pair of tilts Friday night, the first night of NCAA Division I hockey games that count this season.

While it will undoubtedly pale in comparison to that rapidly-approaching time when Penn State is directly involved, it was nevertheless exciting to be able to watch hockey that directly affected the Nittany Lions. Let's take a quick look at what happened. 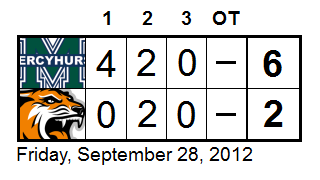 RIT, last season's Division III national champion, opened their Division I era rather ambitiously, with a banner-raising ceremony and a home affair against - with all due respect to Robert Morris, which won the conference tournament last year - the CHA's dominant program, and one that carried a preseason rank of 10th into the season.

Indeed, it looked like the Tigers bit off more than they could chew right from puck drop. RIT actually won the opening draw, but the puck ended up deep behind the Tiger net, where Laker captain Christine Bestland found Christie Cicero on a beautiful back-door feed just eight seconds into the game to beat Laura Chamberlain. Ten seconds after that, just 18 into the game, Cicero assisted Bestland to make the score 2-0.

Mercyhurst tacked on two more by the end of the first period, which saw a shot count of 16-3 in favor of the Lakers. That's as bad as it got for Tigers coach Scott McDonald and his team though.

When a beaten-down team gets up off of the mat in an already-decided game, it's always a little tough to determine why. Maybe MU took their foot off of the gas. Maybe RIT had opening game jitters and are a better team than demonstrated early. In all likelihood, it was a little of both. Nevertheless, 14 seconds after the score ballooned to 6-0 Lakers, the home team finally punched back. Carly Payerl scored the first goal in RIT's DI history by re-directing a point shot home, and Katie Hubert scored the game's only power play goal with 27 seconds left in the second period to close the scoring. She and her teammates actually outshot Mercyhurst over the last two periods. McDonald was impressed by both sides.


“Mercyhurst is a top-10 team and showed why right away. They are very quick, tremendously skilled, and did a great job getting on right off the bat. This is a great measuring stick for our team and lets us know what we need to improve on to compete at this level. I thought we definitely played better as the game wore on.”

Regardless, RIT is now 0-1-0 (0-1-0 CHA), while Mercyhurst starts at 1-0-0 (1-0-0 CHA). The six-way tie for first (and last) in College Hockey America has been dissolved, and there is now a team behind Penn State in the standings. Yeah, it had to happen, and the Nittany Lions didn't really earn it, but it's still fun nevertheless. 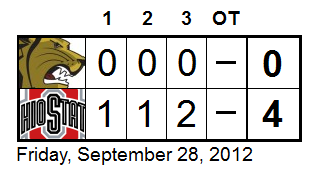 Lindenwood has already played a full season in NCAA Division I, going 8-21-0 last year (with just two wins against another DI team - both were against the Sacred Heart team that the Lady Icers also defeated).

Season two, at least after one game, looked like more of the same after the Lions opened with a 4-0 loss to Ohio State in Columbus. The score was somewhat deceptive, with the Buckeyes launching a staggering 64 shots at Nicole Hensley, a freshman from Lakewood, CO who played with PSU freshman Jeanette Bateman on the Colorado Selects. Hensley kept LU at least in range until the very late stages, when OSU added a pair in the last three minutes of the game.

From the Buckeyes side of things, Kari Schmitt had a goal and an assist while Sara Schmitt, Kari's twin sister, also scored.
Posted by Kyle Rossi at 11:16 PM