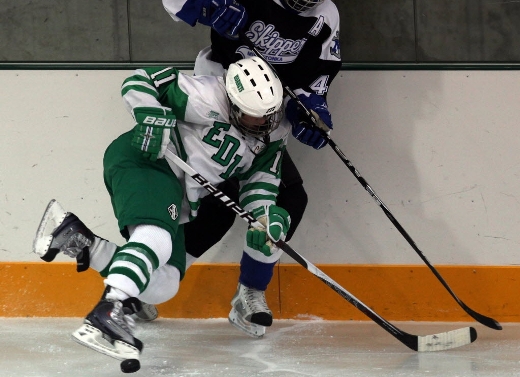 According to USCHO poster "Hux", who maintains the only comprehensive women's commit list out there to the best of my knowledge, Edina High School senior Sarah Nielsen will be Penn State-bound in 2013. While I'm not thrilled about pinning my credibility to something from a message board, given the nature of the "coverage" of women's recruiting, this might be the last anyone hears of it until PSU's signing-period press release. So I'm running with it, and asking for forgiveness in advance if it blows up.

The prolific scorer has been one of the offensive leaders for one of the giants of Minnesota hockey for the last three seasons - she was fourth on the team in points as a freshman before jumping to third as a sophomore and first as a junior. Not bad, considering the 2011-2012 version of Edina had commits to New Hampshire (Megan Armstrong), Yale (Ali Austin) and Union (Lizzy Otten and Maddie Dahl...okay, Dahl is a goalie...still).

While it would easy to talk about five-point efforts against overmatched opponents like Eastview and Blake, the more important takeaway from Nielsen's game log is that she consistently produces against top-flight competition and in big games. Through three section playoff games and one state tournament game last year, she had 10 points in the four Edina wins, and never had less than two in any one game. The Hornets' offense ground to a screeching halt at that point in a semifinal loss, although Nielsen did manage three of her team's 19 shots on goal and won 19 of her 27 faceoffs. In the 2011 state tournament, Nielsen had 11 points in 6 games as Edina made the championship game.

In June, she was picked for the Minnesota High School Junior Festival, helping her team to wins in four of its five games.

Here's video of Nielsen calmly depositing a breakaway winner against Warroad on December 4, 2010. Undoubtedly, if Zac Efron saw that, he'd be impressed. While another video out there is labeled "Buzzer beater goal for Edina's Sarah Nielsen," it appears as if it's actually Armstrong scoring the goal with Nielsen winning the draw to make it possible. Faceoffs, of course, are a vital part of the game, and from the available data (the stat is only kept for state tournament games), all indications are that she is an ace on the dot.


Connections between recruits are inevitable, especially in tight-knit women's hockey circles and especially when recruiting in the same areas. But Nielsen shares a rather unfortunate - from her point of view, anyway - connection with three current and future Penn Staters, as they've helped to end her last three seasons short of a state title. In the 2011 Minnesota AA championship game, Nielsen assisted on both Edina goals, but she was outdone by fellow 2013 commits Amy Petersen (two goals, one assist, including the late winning tally) and Laura Bowman (two assists) in a 3-2 Minnetonka win. One year later, and one round earlier, PSU freshman Paige Jahnke and her Roseville teammates executed a shut-down defensive effort in a 4-1 defeat of the Hornets. In 2010, Roseville defeated Edina in the state title game, but Jahnke didn't play in that one, according to a box score.

If you can't beat them, join them, as the saying goes. Then again, before joining them, I'm sure Nielsen wouldn't mind finally getting the best of Minnetonka and her two future teammates in a state tournament game as a senior this year.

To be sure though, Nielsen had already joined players like Bowman, Petersen and freshman forward Kendra Rasmussen a while ago in many respects. They're all big-time forwards from the Minnesota high school circuit with big-time numbers. Nielsen, Bowman, Petersen and Jahnke were also all selections to the Upper Midwest High School Elite League last year. Now, they'll team up to form a key part of Penn State's early NCAA teams.
Posted by Kyle Rossi at 12:46 PM