Breakout Past: The Manure Rink of 1922 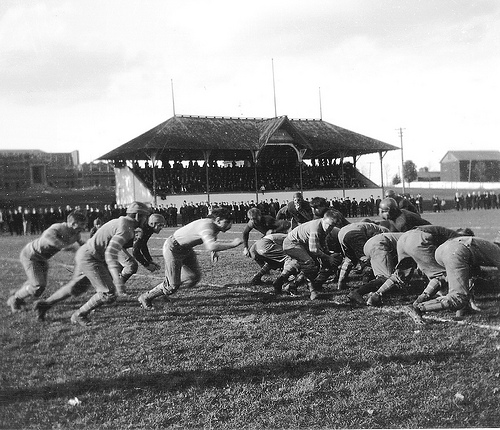 It's very easy to fall into a certain trap when talking about the history of Penn State hockey, particularly with two very distinct eras of teams - the first varsity team that traces its roots to early 1938 and lasted until 1947 and the non-varsity period beginning in 1971 (of course, more recently, we've learned of an aborted attempt at hockey in 1909-1910). The trap? Neglecting the in-between periods. You might say 'idiot, there wasn't any team in those years,' and of course, you'd be right. That, however, doesn't mean that there weren't important, or at least interesting, developments in those years. Last summer, for instance, we looked at 1954 and the origins of the facility that eventually became the Icers' first home.

This time around, we'll hit a similar story, minus the happy ending. Under the leadership of Hugo Bezdek, Penn State's athletic director from 1918-1936 (and also, at various times, the head football, basketball and baseball coach) a number of attempts were made at building an outdoor rink in the 1920s. The following story appeared in the January 13, 1922 Penn State Collegian and outlined the first of these (as always, click to enlarge the articles):

Some of the highlights:
Four days later, the Collegian published an editorial supporting the idea. 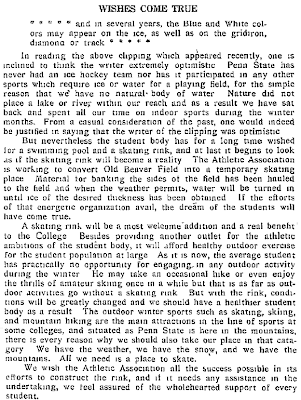 By January 31st, everything was still going well...other than the fact that Old Beaver Field wasn't flat, and that prevented some areas from freezing. Still, Bezdek remained enthusiastic both about the present and the future of the rink (although we're apparently calling it an "experiment" now).

Nearly one month later, on February 28th, another editorial makes it seem clear that the "experiment" has not been successful this year (an assumption confirmed by a letter to the editor on December 5, 1922 that discusses "the failure" of "last year"), but that "the ball has been started rolling in the right direction...Bezdek will be on the job and Penn State students can count upon results." 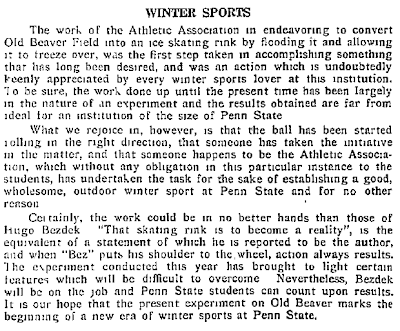 To me though, that's precisely what makes these in-between periods so fascinating - the sheer number of times Penn State tried to get it right, tried to have a rink and a varsity hockey program, and still somehow failed. It's not at all farfetched to see how more success in the 1920s could have meant PSU having one of the most traditional programs in the NCAA today. Instead, hockey finally took hold in what turned out to be the worst possible time since the sport's invention to try to start a program, just prior to the outbreak of World War II - but that's a whole different chapter in PSU hockey's 100-year run of teases and bad luck.
Posted by Kyle Rossi at 2:20 AM