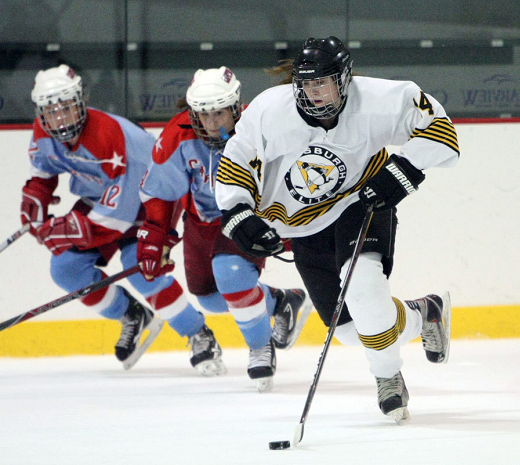 In last week's Three Stars, I included a picture from the event (which took place two Saturdays ago) of Sara Chroman with the coaching staff. Here is a gigantic improvement on that, both in terms of quantity and quality.

Anthony DiFruscia is a name to keep in mind if you're a recruiting geek. Selected in the second round of the OHL entry draft last year by the Niagara IceDogs, the 16-year-old Ontario forward instead chose to attend Salisbury Prep in Connecticut, where he plays with 2013 defense commit Thomas Welsh. So why am I talking about him?


He has received scholarship interest from American universities and has already received offers from Penn State and RPI.

At his age, 2014 is his earliest possible college entry, so here's hoping he continues to resist Niagara's overtures until then while simultaneously receiving a solid sales job from Welsh. If you read the article, you may have noted that the Canadian media (which is notoriously anti-college hockey) is already trying their best to push the other way.

That there would be what the mediator's handbook calls a win-win-win situation. Now if only they'd decide to hit Jill Holdcroft next week...

You remember Matt Tendler, right? He's the former Neumann goalie who started the game at Citizens Bank Park and kept the Icers off the board during the first period, making 12 saves. Under baseball rules, he would have been the goalie of record. It's probably worth also pointing out that he's a Pennsylvanian and therefore wasn't involved in NU's NCAA violations, which pertained to financial aid awards for Canadians. Anyway, he's now with Pennsylvania Puck's favorite team and recently had this to say to PennLive:


The outdoor game is the second greatest memory of my hockey career, second only to my first game for the Hershey Bears. For me, I think the coolest part of the game was beating Penn State, a university that many of my friends are alumni of, and as we know are very faithful to their school.

The game could not have played out any better than it did for me. I was able to start the game, posted a shutout in the first period, was named first star of the game, and gained bragging rights over so many of my close friends. To even have the opportunity to skate on the outdoor ice at Citizens Bank Park is a memorable one, but to actually get to play a game against such a well respected university and play in front of that many local fans is something I will never forget.

Back in October, Notre Dame became one of the last programs to jump the sinking CCHA ship, electing for Hockey East once Conference Armageddon hits in 2013-2014. That move will give HEA 11 teams, so naturally, speculation as to a potential 12th team began immediately (nobody seemed to care that the Big Ten once chugged along for nearly 20 years with 11 teams). Apparently Connecticut, presently of Atlantic Hockey, would like to be the answer to the question. Pluses to UConn's entry from the league's perspective? Well, their women's program is already in Hockey East and non-hockey fans are familiar with the school. Minuses? Just about everything else. Regardless, according to the Hartford Courant, Hockey East officials have already taken a site visit.

Personally, I would have liked to have seen RPI take the slot. It seems pretty silly to choose a program based on promises of new facilities and increased investment when you have a program already with those things - and toss in a pair of national championships for good measure - right in front of your nose. But, if nothing else, UConn allows me to insert a picture of the former home of the Hartford Whalers, since there's a chance the Huskies would play there.

Milner, who will attempt to lead Boston College to a national championship this week, is just one of a ridiculous number of goalies coming from Pennsylvania in recent years. There's no doubt PA hockey is on the rise, but nowhere is that more evident than between the pipes. Incoming recruit Matt Skoff gets a mention in the story as well.

Apparently, incoming forward David Glen was looking at Princeton before Guy Gadowsky moved to PSU. Score one for the coach over the arena in the "which draws more recruits" war.

The obligatory "hey, the arena is being built" article from anyone who covers Penn State athletics. Still, if you can get past the factual errors (the Pegula donation was announced in January 2011...what?) there's some nice stuff within, particularly in terms of fundraising updates. Here's one Joe Battista quote:


"Our goal is to endow every scholarship that we’ll offer. Right now, we’ve fully-endowed 20 of the 36. We’re getting there."

Outside of the Frozen Four, which begins Thursday, the dismissal of 12-year head coach Troy Jutting at Minnesota State/Mankato State/MSU-Mankato/whatever was the biggest college hockey story of the past week (to go with the UConn thing, I guess). If you're keeping score, this is coaching change number two this year - Joe Marsh officially stepping down at St. Lawrence was the first - so only six more will equal the record-breaking offseason of 2011.

This is just freaking cool. 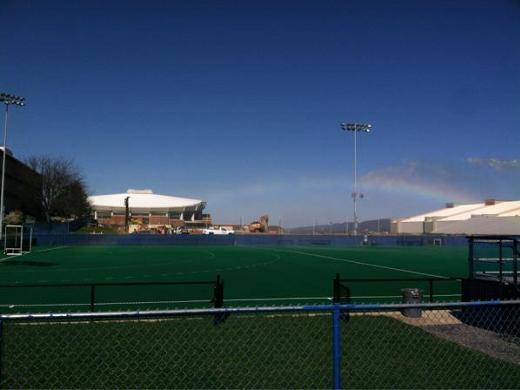