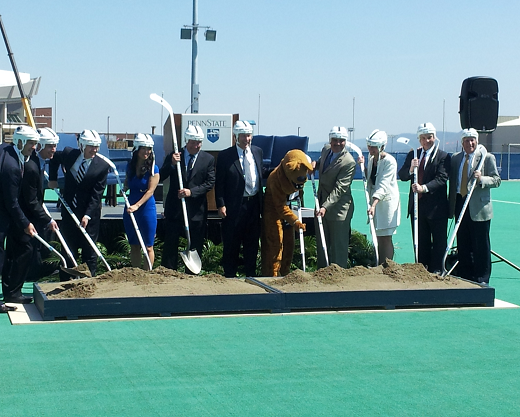 Here's a quick spin around the best of what was written (and photographed) during Friday's Pegula Ice Arena groundbreaking ceremony.

The Centre Daily Times wrote the longest recap of anyone, and expertly weaved quotes from the ceremony itself with others from the media availability sessions - they also included a 16-photo gallery.

SftS didn't attend the festivities, but offers something much better than a 28th rehashing of the same quotes - analysis of the program's marketing efforts to this point.

Pegula Ice Arena breaks ground, is ahead of schedule for Penn State Division I Hockey
(PennLive)

Greg Pickel wrote two quality recaps with different angles. His PennLive piece played up Guy Gadowsky's comparison of PIA to Hersheypark Arena, while on StateCollege.com he led with the well-known story of Joe Battista's receipt of Terry Pegula's confirmation text message while in Boston. 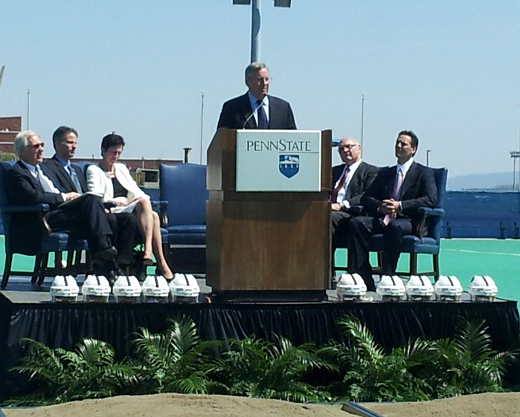 
Pegula, an oil and gas executive who founded East Resources in Warrendale and also own the Buffalo Sabres, pledged $88 million to bring Division I hockey to his alma mater. He since has upped that commitment to $102 million to ensure Penn State hockey "has the resources to be a national leader."

"Let's all visualize Guy Gadowsky and (women's coach) Josh Brandwene handing off national championship trophies to their teams in the future," Pegula told the crowd of about 300, which included donors, members of the men's and women's hockey teams and former Nittany Lions quarterbacks coach Jay Paterno.

The official release gets the job done and also comes with a photo gallery.

The AP also gets the job done, sans photo gallery.

According to Dave Joyner, "it's an HR issue" is the new "no comment," at least if you go by his reply when repeatedly asked at the event about the sudden dismissal of assistant athletic director Mark Sherburne Friday night.

Mark Brennan wins this slot for FOS over other write-ups on this blast:


Penn State officials were not nearly as adamant about sticking to the school's human resources policies when it came to [Joe] Paterno. The Board of Trustees announced that he had been dismissed from his job on a live telecast.

On multiple later occasions — both individually and as a group — board members gave further explanations on why he was fired. The latest was in early March, more than a month after Paterno died following a short bout with lung cancer, when the board released a statement saying Paterno was released due to a “failure of leadership.”

Yeah, that. Let's also not forget that Joyner was part of the scum patrol before his cronies put him in charge of the athletic department.
Posted by Kyle Rossi at 3:09 PM