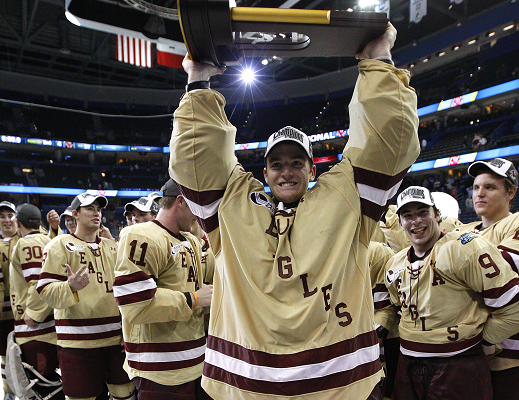 This just in: some people are rather displeased about Penn State's very existence in their precious realm. Here's one opinion taken from the article which, by the way, very accurately captures the range I've observed.


Chris, a Minnesota fan: “It’s [expletive removed]. Look, we have years and years of alignments. We’ve got teams that we’ve played, teams that are rivals, teams that are together. Minnesota is all of a sudden the most western team and at least four hours away from its closest rival and [now will travel] all the way to Pennsylvania? Penn State decided that all of a sudden they want a team? No. Look, be in Hockey East. I don’t care. It’s very simple.”

I think Boston College just scored again. I guess maybe we should go to Hockey East if we want to compete with the best.

2. Gadowsky chooses 11 Icers for Division I squad
(The Daily Collegian)

Christine Newby does her usual fantastic work in providing the most depth of anyone out there regarding the selection of 11 Icers to next season's roster. To be specific, she got quotes from one of the cuts (Josh Daley, who sounds like he's headed elsewhere) and examined the Title IX implications of the roster's size.

Helped by Pittsburgh native and Most Outstanding Player Parker Milner, BC (yawn) won yet another national championship. Other takeaway: the last NCAA Division I season without Penn State is now complete.

Congratulations are in order to Tom Laessig - father of Ice Lions T.J. and Neil - on his new gig as the boss of Lehigh's ACHA Division 1 hockey team.

Guess what? They're taking down names of those interested in season tickets for the inaugural season at Pegula Ice Arena. If that doesn't blow your mind, I'm not sure what will.


Where Do D1 Hockey Players Come From?
(sixteenwins.com)

This is brilliant. And as I've been saying all along, Pennsylvania rates extremely well - perhaps second behind Illinois - when looking at player production per major-conference program.

I'm sure most people associated with Penn State have read this article by now, but if you haven't, it underscores - in thick, black Sharpie - how little regard Pennsylvania Governor Tom Corbett has for PSU, or even morality and common decency. Why do I bring this up? Well, if you're not aware...


Corbett's leading donors are Terrence and Kim Pegula, who have given $280,000.

I realize that the Pegulas don't owe me anything, and they're certainly free to support whichever politicians they prefer for whatever reasons matter to them. At the same time though, I would like to see some evidence that Corbett's treatment of PSU (not to mention his other shortcomings) bothers them more than they value his protection of hydrofracking. That said, I'm not going to hold my breath waiting. If it didn't happen when Corbett tried to slash the school's appropriation in half (that's $88 million times two per year if you're keeping score), it certainly won't happen over the ouster of a coach TPegs evidently didn't care for anyway (at the very least, he didn't hesitate to throw Joe Paterno under the bus in an ill-conceived interview with TSN while simultaneously trying to bury his own skeletons).

Alternate headline: other than the whole "the program was killed, then un-killed thing, nothing's really changed in Huntsville."
Posted by Kyle Rossi at 4:42 PM