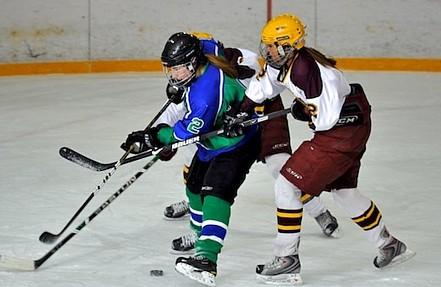 As the moment of finalizing the 2012-2013 women's roster approaches, Sartell/Sauk Rapids (MN) forward Kendra Rasmussen has officially committed to Penn State for the coming year.


“I fell in love with the campus,” said Rasmussen, the two-time Times Player of the Year and senior captain for the Sartell/Sauk Rapids Storm’N Sabres girls hockey team. “I first went out there in September and it just felt like home to me. I think I made a good decision."

She was also offered by Minnesota State-Makato and Quinnipiac, but decided on Penn State, largely due to its pre-med program. Her academic chops, as you might expect from someone who actually bases their college choice on academics, are pretty impressive - she'll already have 22 credits in the books when she begins classes this summer.

Hopefully she doesn't graduate too quickly, because she's not horrible at hockey either. Rasmussen was a scoring dynamo for the Storm'N Sabres (bad, bad things happen to nicknames when two high schools share hockey teams - Rasmussen attends Sartell, for what that's worth), and had nearly twice as many goals as anyone on a team that advanced to the Minnesota Section 8AA finals this past season before losing to Roseau. (here's video evidence that she's capable of making it look easy, and here are people talking about how she makes it look easy).

Sartell/Sauk Rapids was 18-8-1 overall, thanks in part to some eye-popping games from Rasmussen: a hat trick and an assist in the section playoffs against North Wright County on February 14th, another three-plus-one game against Hutchinson on December 20th and the reverse of that (one goal, three assists) against Alexandria on November 18th stand out among those. She was appropriately awarded with AP all-state honorable mention honors as the Storm'N Sabres won their league's title.

Rasmussen joins 2012 D Paige Jahnke and 2013 F Amy Petersen as future Nittany Lions produced by Minnesota high schools, a somewhat surprising outcome considering the coaching staff's eastern roots (that's not a complaint, particularly if they're all this complete of a student-athlete package).

The women's roster for 2012-2013 is in its final stages of construction. According to sources, there are 22 or 23 recruited players coming in, which breaks down as 13 forwards, seven defenders and two or three goalies. With Rasmussen, 10 forwards, five defenders and one goalie are counted on the Current Commitments page. That leaves six or seven to-be-identified recruits...and not a whole lot of room for last season's Lady Icers roster if the final roster size is in the range of 27 or 28 players. The tough decisions, again, according to sources, have been made and communicated to the affected players and we should have a good idea of who will lace up to face a tough College Hockey America schedule in the fall sooner rather than later.
Posted by Kyle Rossi at 5:35 PM