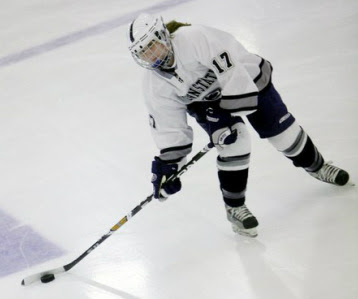 The Collegian got the short end in the groundbreaking roundup post due to its publication schedule, so I'm rectifying that here.

This one flew under the radar with all of the groundbreaking stuff going on, but...


Penn State men's hockey coach Guy Gadowsky is joining the bus tour for all six events during the third week of the Coaches Caravan, with stops in Altoona and Pittsburgh (May 14), Youngstown and Cleveland (May 15) and Erie and Buffalo (May 16).

Previously, Gadowsky was only scheduled for the Buffalo stop. It should be a great chance to meet him, and I'll probably be at my local stop (Cleveland, if you're too lazy to check the right-hand column) now.

Outgoing Lady Icer senior Abby Miller started a blog last week, and it looks like great reading so far, so check her out. The biggest story of the Stanley Cup Playoffs so far, without a doubt, is the number of incidents worthy of supplemental discipline. Here's Miller's take on several of them.

Okay, so I got a Google Alert hit on this, for obvious reasons and was bored that day, so bear with me. From the not-so-subtle dedication in the video, it's established that we're talking about former Brandywine player Chad Thomas, a defenseman from 2006-2011 and an ACHA Division 3 Academic All-American in his senior year. What was his transgression?


Chad Thomas formerly operated a ministry called "The Salvation Movement" and was promptly kicked out when it was discovered he was living with his girlfriend. A hasty shotgun wedding tried to patch up the ministry but it was not to be. Chad never repented of his fornication to his followers.

Now Chad is hearing voices and is being told events are going to happen. These events ALWAYS fail and yet he claims the voice he heard was God and he continues to make videos about his false dreams and visions and posts them on youtube on a daily basis. This is not the first time he has made false prophecies. In all of Chad's videos he appears agitated and frantic. He does not have the peace of God in him. He is not saved and only wants to escape the tribulation without having to obey Jesus.

One of Thomas' YouTube videos was called "POSSIBLE EARTHQUAKE AND TSUNAMI OR SIGNIFICANT EVENT BY LAST DAY OF PASSOVER??", which particularly rubbed the uploaders of the lead video the wrong way (basically that entire account exists to attack Thomas). I particularly like the claim throughout that Thomas "misses the fame and celebrity status that being a college athlete brought him." Yeah, he's just like Claude Giroux in Southeast PA.

High drama. Aren't you glad you know about it now?

PS. It's the offseason. Get used to it.

Know what's cool? When a blog covering an NHL team rates one of your school's commits as one of their prospects that is "trending up" for the past week. That's new, eh?

Tuesdays With Jerry: An Old Man, A Young Man, And A College Hockey Dynasty's Greatest Lessons (Part 3)
(BC Interruption)

The post is good in and of itself, but I'm particularly interested in one of the comments.


I’d especially love to see some football/hockey weekends with schools like Michigan, Michigan State, Ohio State, Wisconsin, Penn State, Minnesota, etc. with a hockey game on Friday night and football game on Saturday. Of course, this would require the football program to schedule someone besides Perkins School for the Blind as a non-conf opponent, so I’m not getting my hopes up.

It would be tough to pull off for a non-Big Ten team on the football end, with the schedules set so far ahead and with the conference becoming increasingly insular (see: the eventual jump to nine conference games). Still, I'm game.

For the ill-informed, since this is kind of old news (the gold medal game was on the 15th)...

Agosta tied the game late in regulation, then assisted on the overtime winner. Someday, a Penn Stater will be doing that instead. Preferably for, instead of against, Amurrica.