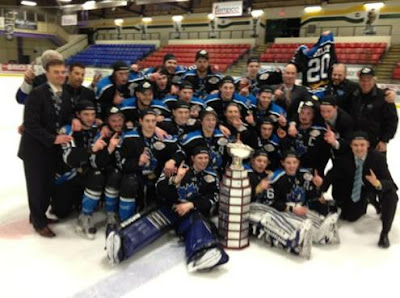 If you like hockey because of its drama, the 2011-2012 Penticton Vees are probably not your favorite team. Behind sixteen NCAA Division I-committed players, including Wade Murphy (Merrimack), Joey Benik (St. Cloud State), Mario Lucia (Notre Dame), Travis St. Denis (Quinnipiac), Bryce Gervais (Minnesota State-Mankato), Ryan, Mike and Connor Reilly (Minnesota) and of course Curtis Loik (Penn State), the Vees were 54-4-2 in the regular season. Their 110 standings points were 26 ahead of the next best team in the BCHL. Eighty-four of those points came during a Canadian Junior A record 42-game winning streak that stretched from November 11th through March 9th. Yeah, they did okay.

On Wednesday night, they made official what would have taken an upset in the "all-time" category to prevent: the Fred Page Cup as playoff champions of the BCHL, via a finals sweep of Powell River.

Loik, for his part, contributed to all of that success as a tremendous shutdown forward with a penchant for scoring timely and usually dirty goals. Three happened during Penticton's fifteen game run through three playoff series. The first came in a pivotal game five of the opening round against Chilliwack (including 2013 defenseman David Thompson), the only team to pose a legitimate challenge to the Vees. His tally early in the third period gave Penticton a two-goal advantage and stood up as the winner in a 4-2 victory. The third came late in the second period of the championship-clinching 3-2 win over Powell River Wednesday night and also eventually became a game-winning goal. He was pretty happy about that one.

This is actually the second championship won by Loik this season. In November he, along with fellow PSU commit Luke Juha, helped Team Canada West to the gold medal at the World Junior A Challenge. I'm sure he wouldn't mind adding to the count, either. Up next: the Doyle Cup championship series, which pits the BCHL and AJHL champions against each other for the right to go to the RBC Cup, the Canadian Junior A national championship (2012 forward Jonathan Milley, incidentally, scored both goals in an RBC Cup clinching 2-0 win for the CCHL's Pembroke Lumber Kings over the BCHL's Vernon Vipers in last year's event). 2012 forward Reed Linaker and his Brooks Bandits are locked in a 2-2 series in the AJHL's Enerflex Cup finals, so they represent a possible next opponent for the Vees.