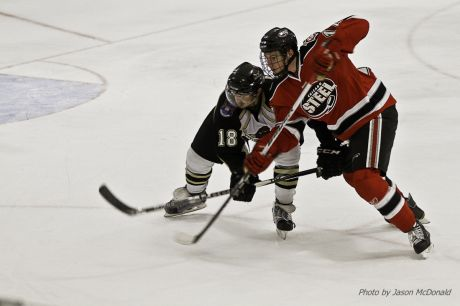 Speed is a vital element of Guy Gadowsky's system. So, apparently, is size. Zach Saar, a forward who stands 6'5" and weighs 200 pounds is Gadowsky's newest commit, according to the website of the USHL, where Saar presently plays with the Chicago Steel.

Zach's father, Brad Saar, was a reserve linebacker on Penn State's 1982 national championship football team before finishing his collegiate career at Ball State. And while he didn't push his son towards PSU (or, uh, Ball State), he wasn't disappointed that his son will end up there. Said Zach:


"My father was thrilled when I gave him the news. He didn’t put any pressure on any of my college options, but when I told him over the phone that Penn State was the one, I could hear the excitement in his voice."


"I loved the campus, but the coaches were the reason I committed. Penn State was one of the first schools to talk with me and I got the opportunity to do an official visit earlier this year. The players were great and the people in the community were all very nice. To cap it off, University Park is a very beautiful place."

"I felt I couldn’t go wrong with Penn State, especially getting to compete in what will be one of the top conferences in college hockey. On my visit they showed me the blueprints of the new arena and it is going to be unbelievably impressive."

In Saar's first USHL season, 2010-2011, a wrist injury limited him to 32 games, but so far this year he's stepped up in a big way - including beginning the season with a pair of two-goal games in the team's first three. Of course, it's one thing for me to say he can score goals, but quite another for me to show you (28 seconds in).

He was the 40th overall pick by the Steel in the 2010 USHL Entry Draft out of the Little Caesars program, which counts Mike Modano, Doug Weight and John Vanbiesbrouck among its alumni.
Posted by Kyle Rossi at 11:30 PM