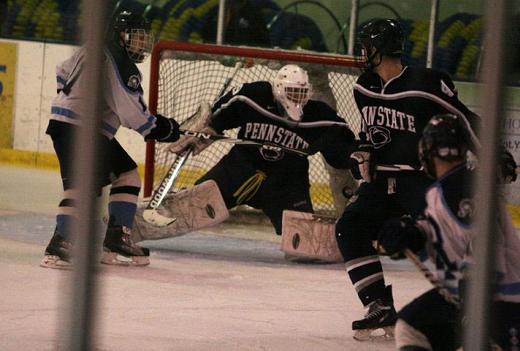 In case you missed this possibly-under-the-radar detail...


The Penn State game is the part of a home-and-home deal which will bring the Nittany Lions to Steele Hall next season as a first-year NCAA Division I program. And while it's the [not the] sexier of the two games this weekend, the Morrisville State trip is much more meaningful.

I haven't been able to confirm a date for the FSU game as of yet, but when I find anything out, I'll let you know via a quick post. Bonus points to Fredonia State for the use of "sexier" in a rote pregame write-up.

Katie Montgomery checks in with a great look at Taylor Holstrom, the middleman of the Icers' top line. Holstrom's always been an interesting case to me as a guy who had a lot of success at Mercyhurst, yet still transferred for the great unknown of what will transpire at PSU. Surely, he agonized over the possible outcomes, weighed the situation from every angle...


"It's Penn State, who wouldn't want to come here? I heard they were starting the [Division I] program and I had the opportunity, so I took it."

Congrats IcersGuy, who I can now say I know in real life (kinda), you're first star.

If you're not in the mood to read my update-every-30-seconds live blog from when I was at the Fredonia State game or the live blog from when I watched the Pitt game late Sunday night and realized that Tosh.0 is less funny without sound, go here. Actually go here anyway, because he has thoughts on the NCAA-worthiness of a couple of Icers, something that will become more of a topic as the season goes on, especially if the vast majority of games continue to be not all that competitive.

The first D2 ranking of the season came out last week, and the Ice Lions were positioned well - third in the Southeast Region to be specific, behind only perennial powers Florida Gulf Coast and Maryland-Baltimore County.

PSU solidified its new found ranking with a pair of home wins over No. 4 Virginia Tech (4-1 behind Chris Lewis' pair of goals and 3-1 thanks to two more points from Lewis, as well as a goal-assist night from Patrick Kinch) and a Sunday shutout of Temple in Philly. At Southeast No. 3, 12-2-0 and coming off a three-game weekend, guess what the team was up to on Monday.

The Ice Lions' next game is Saturday at 8:00 p.m. at Drexel, with a live feed available on UStream. If Penn State loses, it certainly won't be from a lack of commitment.

If Penn State had anything resembling a goaltending issue, I suppose we could lament Mark Schacker, a PSU-to-Arizona State transfer, as one that got away. But instead, he's just a good goalie who might be trying to win an important game against the Icers in March.

We hit Holstrom earlier, so why not a check-in with another DI transfer, Justin Kirchhevel?

Penn State plays Delaware in just under two weeks (November 18 and 19) in what could prove to be the biggest regular-season games in the entire ACHA this year. So how have the Blue Hens, particularly sophomore forward Collin Going and senior defenseman Josh Weiner, been preparing?

Sorry Chris, I'm all about the (western version of the) maple leaf in this one, thanks to the two involved PSU commits, Mr. Loik and Mr. Juha. Ooooooo Can-a-da, someone else's home and na-tive land....in all seriousness though, it will take a lot to top Team USA in this tournament.

Here are a few quick blurbs on the rest of the WJAC field. The event begins today for most teams, although Canada West's first game is not until Tuesday at 10:30 p.m. against Sweden.

I considered a post about the hockey applications of the new NCAA reforms, which most notably include a stipend of up to $2000 per athlete on a full scholarship. Then I read WCHB's post, threw up my hands, and said "I can't write it better."

Obviously, this is very significant news for college hockey, as the network soon to be known as NBC Sports has unveiled their initial package of games to be broadcast this season. There will surely be more on the way in subsequent years, especially if Notre Dame and Hockey East are involved.

I held this link until last simply because I'll have more thoughts on it later this week. A quick teaser: I'm concerned that the Big Ten, and by extension Penn State, has already fallen behind in the arms race.
Posted by Kyle Rossi at 3:33 PM