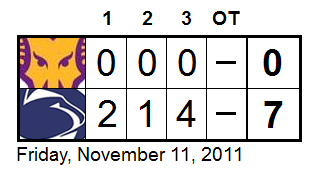 Penn State improved to 10-0-0 with a 7-0 win over West Chester Friday night in the Ice Pavilion. While the game was never seriously in doubt, the Icers had to nurse a 2-0 lead for over half of the affair, and were able to do so thanks to some timely saves from P.J. Musico in earning his first PSU shutout.

Mike McDonagh's superhuman shorthanded effort finally provided some legitimate breathing room with 5:39 left in the second. The power play - highlighted by Brandon Russo's first PSU goal - polished things off in the third period, as it accounted for all four goals in a frame where it seemed like there were multiple people in the penalty box (or in the dressing room) the entire way.