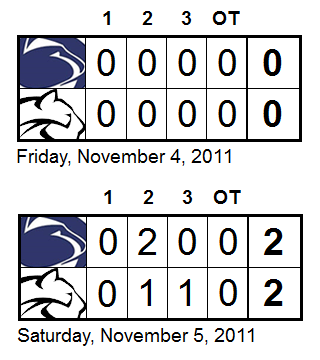 If the Lady Icers keep playing like this, perhaps we should stop thinking of their schedule as “ambitious.”

Penn State’s second weekend road trip against NCAA Division III competition ended even better than the first: in 0-0 and 2-2 ties against the Chatham University Cougars. And while yeah, Chatham maybe isn’t the best measuring stick in the world (0-18-0 last year, with a goals for-goals against of 19-124), the simple fact remains that PSU is proving more than a worthy opponent for teams that are a step up from ACHA competition. It’s a reality that will serve the team well into next year and beyond, when teams like Division I power Mercyhurst begin their regular appearances on the schedule.

Friday’s game, as you might expect in a scoreless tie, was about the goaltenders. PSU’s Katie Vaughan (33 saves) and Chatham’s Megan Buchanan (45 saves) engaged in a stunning head-to-head showdown where neither woman blinked.

From a Lady Icers perspective, it was Katie Murphy (eight shots), Tess Weaver (seven), Elizabeth Denis and Sara Chroman (five each) who tested Buchanan most frequently, but to no avail. Chroman and Katherine Gausseres had breakaway attempts shut down by Buchanan, an Ottawa native. Vaughan’s most frequent nemesis was Sydney Williams, who had nine of Chatham’s 33 shots.

The next day brought some goals, although again in a level proportion. Denise Rohlik had a hand in both PSU ginos – first serving as primary assist on the Denis goal that tied the game at one at 14:36 of the first period, and just 60 seconds after the Cougars had drawn first blood. Then with CU’s Sara Forbes off on a checking penalty the 2011 World University Games vet, who received first-star honors in this affair, struck on the power play. Forbes atoned for the situation with her own power play goal early in the third period, to close the game’s scoring.

That’s not to say that there weren’t chances after that point. The Lady Icers rifled 16 shots on Kaitlynn Smith (who took over for Buchanan on Saturday) in the third period, including a breakaway by Tess Weaver, who then paid Chatham back for their denial with a crucial late blocked shot. PSU followed up by outshooting the Cougars 6-1 in the overtime period.

PSU's next outing, on Friday, is a one-game return to Pittsburgh - this time for a second game in two weeks against California (PA) in a rematch of the Lady Icers' 7-0 romp on October 28th. The following weekend, November 18th and 19th, Josh Brandwene's charges will host NCAA Division III SUNY-Cortland.
Posted by Kyle Rossi at 4:53 AM