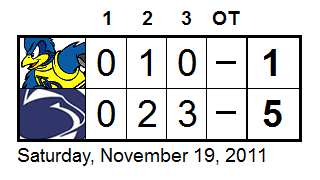 The synopsis recap of Saturday night's split-salvaging win is brought to you by IcersGuy over at Black Shoe Diaries (linked above).


Looking to rebound, the Icers would come out firing in the first period. Having Justin Kirchhevel back in the lineup was made apparent, as he nearly scored in the first period, but the Blue Hens would keep it a scoreless tie heading into the first intermission. These two teams would not remain off the scoreboard, though. Early in the second period, Brandon Russo would make a sliding stop in the defensive zone, make a quick outlet pass to Dominic Morrone, who would send Bryce Johnson in to beat the Blue Hen goalie and give the Icers a 1-0 lead. Later in the period, the line of Eric Steinour, George Saad, and Kurt Collins would provide some solid offensive pressure that would lead to a goal for Saad and extend the lead to 2-0. Delaware would would cut the lead in half when the Icers would lack some focus in the defensive zone and allow the Blue Hens to put an easy goal past PJ Musico.

The Icers would take the 2-1 lead into the 3rd period, and the play would go from end to end for much the period. The Icers would finally begin to assert themselves and made it a 3-1 lead when Tim Acker put home a loose puck after some strong play in the offensive zone. A few minutes later, the Icers would take advantage of the power play and a Blue Hen mental mistake, as Mike McDonaugh would extend the lead to 4-1. Late in the period, Acker would get his second of the night (and as an Icer) on a 3-on-2 breakout for the Icers. That would be the final word for this game, as the Icers would split the weekend with a 5-1 win.