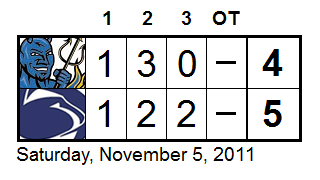 Penn State jumped to 8-0-0 with a gritty and physical come-from-behind 5-3 win against NCAA Division III Fredonia State at the Ice Pavilion Saturday night. Justin Kirchhevel's pair of goals kept the Icers well positioned for a comeback despite a 4-2 Blue Devils lead late in the second period. Matt Madrazo recovered from early struggles - including a pair of penalties - to make some huge saves down the stretch. PSU's power play got back on track with a 3-for-4 night, including Steve Edgeworth's point blast that tied the game at four 1:04 into the third period.

The live blog for the game is immediately below. Still further down, beneath the live blog, are postgame quotes from Kirchhevel, Madrazo, Edgeworth and coach Guy Gadowsky. Special thanks are in order to Daily Collegian hockey writers James Nicol and Katie Montgomery, who made the quotes look a lot better than they would had I been the only one asking questions. Put mildly, they're much better at journalism than me, so keep up the great work guys.

“If you look at the shots on goal, I think they were a very good defensive team. They played us well, and I think it was a great opportunity. I’m thankful that they came down and played us, they’re obviously a very good NCAA Division III school that has a lot of success and it sort of gives us an idea of where we’re at. I think we’re all pretty happy with our offense, but after we saw our shot output tonight, I think we understand that we still have to do things better.”

“We’ve been pretty successful pushing the pace in games, but sometimes we’re lax in practices, and I think we saw today that we have to continue to get better at doing things quicker. I think when we faced a team that played so well defensively, that we struggle to get the offense that we want and that we’ve been accustomed to.”

[On coming back from a two-goal deficit] I was happy to see it because we’ve done it before. We did it here [against Ohio], we were down, and it was the first time we were down and we came back and had a really good showing. It’s nice to see that it wasn’t a fluke. There’s a lot of character [on the team], and what a tremendous goal by McDonagh to Collins, who made a great play to Saad. Three veteran guys who have a lot of pride in not losing, and that was great to see.”

[On his lack of changes with the forward lines and defensive pairs] “When we have the record we do, it’s a lot easier to maintain than when you’re losing. So it’s a little tough. And there’s injuries that have to do with that as well. But right now, our offense has been pretty good and sometimes you change things to get a little synergy going, but I think we have that right now, and I think it’s tough with the results that we’ve had to institute a change just for the sake of the change. Normally it should come from a necessity.”

[On the power play] “One of the aspects I didn’t like is that we didn’t get pucks through very well. And when we finally did with Edge, it’s a big, big goal. I thought we continued to push the pace on the power play, which was different than we had before, so that was really good, and I think that’s what resulted in the goals. But we do have to do a better job of getting pucks in from the point.”

[On Forrest Dell] “He stepped up there in the third very well. You know, he’s been put in a tough situation, to be a forward that’s come back. He hadn’t played defense before, only on the power play. And I think he’s done a really good job. I don’t know if you saw the same thing I did, he really made a great read as a defenseman, a read that only a defenseman would make, and he made it. It was actually very surprising, but very nice to see. I think he’s a smart, smart guy, and so he’s getting it. [Sunday] actually, we’re going to try him at forward again, but with the injuries that we have, he’s really stepped in and done a great job. He’s a really smart player, and he can move the puck too, so he fits how we play from the point.”

[On his goal] “Just a good pass from the corner, I just got on ice and just tried to get it on net, I wasn’t trying to do anything special, just try to get it on net low for a rebound, and it just went through.”

[On the team’s defensive play] “We followed the game plan, got pucks deep all game, and it’s a little tougher opponent than we’re used to, and we battled through it and we’re real proud of it.”

“Our Kirchhevel line, they always play well, they had a strong game. Daley’s line, they started out the game strong for us, got the power play right away. I could go through the whole lineup and say positive things about everyone.”

“It’s always good to have a challenge, we weren’t sure of this caliber of hockey, none of us had played against a Division III team, so we were all pretty pumped up for it, but it didn’t affect anyone with nerves or anything.”

[On Fredonia State’s size] “We hit the gym just as much as them, if not more. Probably more actually. Big guys, we just try to get pucks deep, skate around them, and it doesn’t affect us.”

“We just learned that we’re pretty mentally strong, we made another comeback win and we’re proud of that. We just stuck to the game plan, and it’s really that simple. We play the same way every game, and as long as we keep doing that, then we’re going to keep winning.”

[On his illness this week] “It was just kind of a one-day thing, it happens. But we had a couple strong practices Thursday and Friday, so it wasn’t a big deal…I just had a lunch right before practice, and it didn’t go down right, it happens. No comment [on the specific food that did it], I don’t want to put anyone out of business.”

“It was definitely a team effort. Some guys didn’t play too well in the beginning and turned it on in the end. It just shows up in the team we are. We come…down from any deficit, we have trust in each other. I wouldn’t say I had my best game tonight, but I had guys on my team to stick up for me and [they] were back there for me.”

“It definitely feels good [to win]. First and second period, I felt good, we weren’t getting bounces, high stick goal, power play goals. But in the third period, you gotta buckle down, and that’s what Coach is trying to instill in us, the mental toughness aspect. We all came on in the third period and were like ‘we’re going to win this game.’ It’s obvious that everyone on this team showed that we have better mental toughness than them.”

“We have to stay level-headed. As I said after all the other games, we didn’t outplay them by any means. The shots were pretty much identical. We outworked them, and that’s how we’re going to win our games this year.”

“[It was] a solid defensive effort. They threw something at us that was different, they put two guys in front on the power play, which we haven’t seen all year. It caused some problems with some screens in front, but we fought through it, and that’s all that matters.”

[On his penalties] “You can’t let it change your game. Obviously, I made a mistake on both of them – I came out, stopped the puck on a breakaway, shot it over, and the other time, I tripped a guy. But you can’t change the way you play [Just the price of being aggressive?] Exactly. You just gotta keep playing your way, because if you change the way you play, you’re not going to come out like we came out tonight.”

“My line played awesome, and our D really stepped up big tonight. For me, scoring two goals is just another game. I mean, we want to score goals, but we don’t care who does it. It was good offensive production by our lines, so it was good to see out of us.”

[On his line’s play this season] “We see the ice pretty well, so when we get moving it’s pretty easy at times, but obviously we gotta work hard at getting better day in and day out.”

“We’ve been down before and we came back, so we knew we could do it, but I mean obviously this is a DIII team, so we needed to step up our game a little bit, but we really showed some true character and it’s a stepping stone in our season. We really needed to win this game, so it was a big win for us.”

“They were a big team, they played physical and they played a good game, but obviously we work on our conditioning for a reason. I think we came out in the third and really took it to them.”

[On his first goal] “Olie made a nice play to Holie, and then made a backhand sauce to me and I ended up getting a stick on it, and it bounced in. I didn’t really see it, they told me it bounced in.”