Nobody can ever accuse Mr. Brandwene of not knowing how to build and maintain a pipeline.

Three stars of the game? Useless. They're announced, maybe mentioned in a recap of the game, then largely forgotten (unless a sponsor wants to attach their name to something like the Molson Cup). Do big things for the Ice Lions, and you're a champion, receiving website recognition throughout the season. Very cool.

The Ice Lions topped Division 1 club Drexel 3-1 in their only game of the weekend Saturday night and are now off until the MACHA Showcase, which runs December 2-4.

1. An Imperfect Ten
(The View From the Booth)

Steve Penstone takes home another first star for his look back/look ahead post.


There are some out there that think this weekend (against Delaware) could be a preview of the national championship game. That may be a possibility, but there is a lot of hockey to be played between now and March.

Fair enough, but I'm putting myself out there right now: Delaware will be the best ACHA team PSU sees this year. I believe that UD and Penn State are the two best teams in the ACHA this year. National championship preview? Maybe, but we've seen the tournament in action enough to know that there are no guarantees. And besides, I didn't say Lindenwood and Arizona State were far behind in my estimation.

I feel you Gunner. And since you mentioned Matchbox Twenty (PG-13 warning)...

I wonder how many people watching the surreal Board of Trustees press conference last Wednesday were aware that the guy speaking is a former Icer.


"[Trustee John P. Surma's] credentials include a Penn State accounting degree, playing for the school's club hockey team, serving on the board of trustees since 2007 and pledging $5 million to the Smeal College of Business, where the deanship is named after Mr. Surma and his wife, Becky. Now his credentials include announcing that the child sex abuse scandal that has rocked Penn State's vaunted athletic program has resulted in the resignation of university president Graham Spanier and the firing of iconic football coach Joe Paterno. The announcement was all the tougher because Mr. Spanier has been on U.S. Steel's board of directors since 2008."

Heads up on a new blog devoted to covering PSU's future men's conference and its six member teams.

Maybe now that I've linked them (both here and down the right-side column) they'll reciprocate either via link or Twitter follow. Not that I'm one to guilt-trip someone. 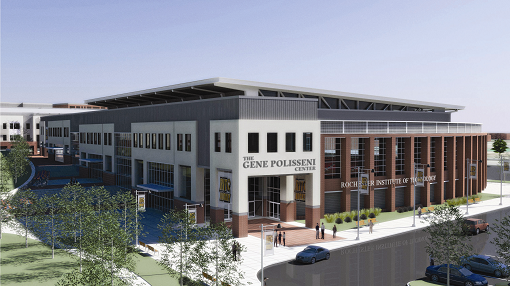 Penn State is not the only school trying to open a hockey arena in 2013-2014. RIT is also targeting that season for a new facility (if they can raise the money in time) which, thanks to a new donation, will be called The Gene Polisseni Center.

There are actually a couple of interesting Penn State angles to this. First, the donation was partially funded by Tom Golisano, the founder of Paychex. Polisseni, now deceased, gave Golisano some startup money for the payroll services giant that now generates over $2 billion in revenue annually and later served as a VP. Golisano, of course, is also the man who sold the Buffalo Sabres to Terry Pegula.

Finally, RIT president Bill Destler said that the school's women's program, now in Division III, will "likely" move to Division I soon. Given the current conference structure in the women's game, it seems like CHA would be a likely destination for that program. RIT's men already share Atlantic Hockey with Niagara, Robert Morris and Mercyhurst, so why not?

Recent Delaware grad Dave Lombardi - who scored one of the most disgusting shorthanded goals I've ever seen at nationals last year - watched the Blue Hens play Liberty over the weekend and grabbed this picture of LU's webcast. Hey, nobody ever said the Jonas Brothers weren't loaded. 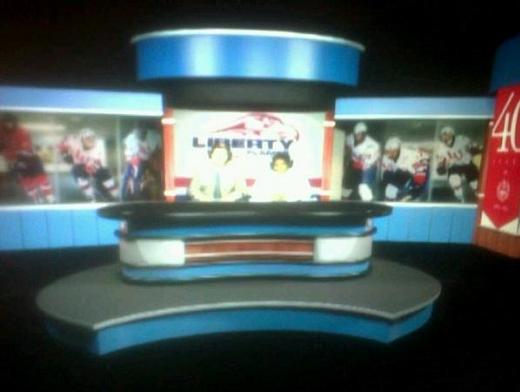