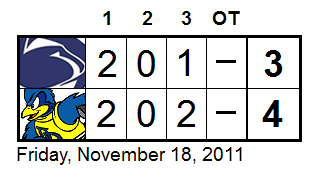 Round 1 of a season-defining showdown went to the newly-minted No. 2 Blue Hens, who used a tenacious, opportunistic effort to take advantage of several defensive mishaps in beating Penn State 4-3 on Friday night in Newark, DE's Fred Rust Ice Arena. The Icers are now 10-1-0 this year.

It was a game of rapid momentum swings, occasionally involving the same players on both the positive and negative sides. Shortly after Dan Meiselman put back a rebound to tie the game at one, he turned it over just inside the UD blue line and the error resulted in a Kevin Miller goal on the other end to get the lead back. In the third period, Mark Zeszut and Mike Piet staked the Hens out to a 4-2 advantage off of a pair of turnovers. Just when Delaware looked to coast to the finish line from that point, Rich O'Brien's deflected shot found its way behind S.J. Broadt with 20 seconds left, and the Icers very nearly forced overtime in a game that was frustrating to watch on just about every level (including the watching itself, if you didn't read the Cover It Live below).

While it wasn't necessarily a game the Icers deserved to win, it was a particularly tough pill to swallow beyond the simple destruction of PSU's unblemished record. A Tim Acker blast from the circle appeared to tie the game at three in the third period, but after a brief conference, it was ruled that the net came off prior to the goal. Shortly after that, Piet scored to expand the UD lead. Following an icing call with 1.7 seconds left in the game, the Icers got an offensive faceoff and O'Brien quickly scored, but not quite quickly enough. The game was also notable for the absences of Brian Dolan, Justin Kirchhevel, Taylor Holstrom, Forrest Dell, Paul Daley and Dom Morrone for various reasons.

Regardless, the same two teams will travel to University Park for a Saturday night rematch.