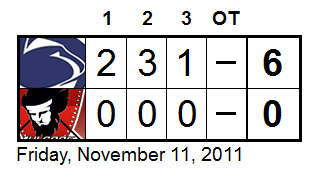 On Friday night, the Lady Icers improved to 4-3-2 overall and 4-0-0 against ACHA competition with a dominating 6-0 blanking of California (PA) at the Bethel Park, PA location of the Blade Runners Ice Complex. The game was the road half of a home-and-home arrangement with the Vulcans that began with a 7-0 Penn State win at home on October 28th.

In that first game, the Lady Icers only got one power play opportunity, although senior Sara Chroman made Cal pay with her first of three goals. This time around, PSU was again clicking with the advantage, scoring on its first four tries. Freshman defender Madison Smiddy sniped two of those, both courtesy of Denise Rohlik assists, while Elizabeth Denis scored one of her two goals on the power play. Katie Murphy - a teammate of Smiddy's with Detroit Honeybaked's U19 team last season - closed the scoresheet during Cal's fourth penalty.

Mary Kate Tonetti got the start in net, giving Katie Vaughan the rare game off, and earned her first Penn State win and shutout.

PSU will stay on its pattern of alternating ACHA and NCAA games this weekend when NCAA Division III SUNY-Cortland rolls into the Ice Pavilion for Friday night (7:00 p.m.) and Saturday (3:30 p.m.) battles. Just prior to the first game with Cortland, the team will learn what the ACHA coaches think of their start to the season as the first ranking of the season is scheduled for release Friday.
Posted by Kyle Rossi at 11:00 AM