Last month, we took a look at PSU's earliest push for hockey, and today, we'll revisit that heady era. For starters, here's a letter that appeared in the State Collegian on January 20, 1910. (Hopefully by now, you know the drill with the whole "click for a bigger size" thing. If you don't, now you do. And if you have issues reading any of these clippings with Blogger's new picture viewer, let me know in the comments and I'll give you a direct link.)

Whoa, wait, "intercollegiate league at Pittsburg?" What's that all about? Let's kick that one off to the foremost historian out there for all things Penn State sports, Mr. Lou Prato. This is part of an article he wrote for Blue White Illustrated last September. I'll forgo my usual block quote formatting since it's a long one.

It was Christmas night 1909 in Pittsburgh, and captain Herb Baetz led the new Penn State hockey team onto the ice at the Duquesne Gardens for the school’s first intercollegiate game. The team was greeted with a loud cheer from the Penn State students who were home for the holidays and from dozens of alumni and other fans sitting in the grandstands of the old trolley barn.

No one was happier than Baetz, a junior studying electrical engineering, who had helped organize the Penn State team. He had grown up not far from the Gardens and had been playing hockey for years.

This was the moment Baetz, his teammates and many of the other spectators in the Gardens had all been striving for for several years. After playing pickup games on the flawed outdoor ice back on campus, Baetz and his teammates were playing in a real game – and inside an actual ice arena, too, where the professionals sometimes played.

They had worked it all out with the owners of the Gardens and the students who ran the hockey teams at the two local colleges, Carnegie Tech and the University of Pittsburgh. The Penn State team had been accepted as the third member of a Pittsburgh Intercollegiate League sponsored by the Duquesne Gardens management, which was paying the expenses for all three teams.

A 10- game schedule had been set up for each team, with two of the teams playing at the Gardens every Saturday evening. On this night, the Penn State team would be playing Carnegie Tech; a week later, on New Year’s night, it would take on Pitt. Its opponents had organized teams and had been playing games long before them, but the Penn State players were certain they would be competitive.

The Gardens had even lured some of the best players in Canada to the city to help form a professional team that competed around the East and in Canada. One of those players, Lorne Campbell, had helped select this Penn State team, and he would now be behind the bench as the coach. Even though the team was not officially sanctioned by the Penn State Athletic Association – the organization run primarily by students and alumni that was in charge of all the sports at the college – the players believed these two games during this festive holiday period would be the final surge that would enable the team to achieve varsity status.

With the Gardens’ management paying expenses, college teams played there on a regular basis, including an annual series of games between Yale and Princeton that often decided the national intercollegiate hockey championship. The Duquesne Gardens, which had been converted from a trolley car barn to an ice arena in 1896, had an official seating capacity of 5,657.

Not a great start for Penn State intercollegiate hockey, but it gets worse. Remember that the letter that kicked off this post was protesting the cancellation of future games. That problem originated with a massive reorganization of the Athletic Association. Part of that involved the creation of the powerful position of "graduate manager. Let's kick it back to Prato.

George Meek, a longtime leader in the association, became the first graduate manager, and in March 1909, he reported that the association’s finances were a mess and needed a drastic overhaul. That included a recommendation that would tighten the rules on authorizing and supporting all the school’s varsity, interclass and club sports. Baetz and his fellow Pittsburghers had been campaigning hard for hockey to become a varsity sport, and shortly after the holiday games in Pittsburgh, the association agreed to put the matter to a full membership vote on Jan. 21, 1910.

The day before that vote, the Collegian published an editorial in support of adding hockey. 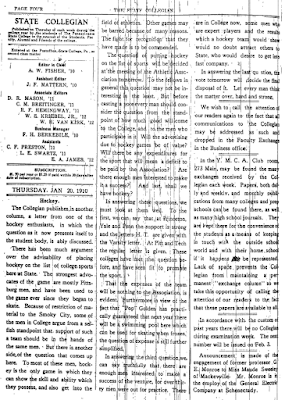 And the vote? I'm sure you've figured it out by now, but it essentially killed further intercollegiate competition in hockey. 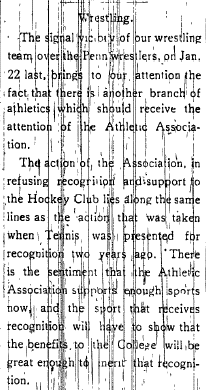 That clipping goes on to extol the virtues of our wrestling program, which achieved varsity status right around that time. What if hockey was as entrenched at Penn State as wrestling? Did losses to Carnegie Tech and Pitt (while wrestling was chalking up big victories against the likes of UPenn) keep that from happening? We'll never know the answers to those questions. But what we do know is that on the heels of this rejection, and other than the occasional Plea For Hockey, the sport largely went into hibernation until the 1930s.
Posted by Kyle Rossi at 12:01 AM