Okay, so technically not. Women's hockey isn't a varsity sport until next year. And Robert Morris, tomorrow night's opponent, puts a little "(ex)" next to this tilt, denoting that it's an exhibition game. Still, one can't help but peek ahead a year when seeing this one as a preview of what's sure to become a heated intrastate conference battle.

So it's with one eye on that reality that we take a little bit of a closer look at the opponent that will open the Lady Icers' final season Friday at 7:00 p.m., in the Island Sports Center. Live video and audio will be available through Robert Morris.

The Lady Colonials are actually entering a new era themselves. Over the summer head coach Nate Handrahan, who had been at Robert Morris since the women's program's second season (2006-2007), left for the same job at Ohio State after some pretty limited success (best record: 2008-2009's 12-20-3). In stepped Paul Colontino, who brings with him tremendous pedigree in the women's game, having served five seasons under Mike Sisti at Mercyhurst. And why bother summarizing it yourself when Robert Morris sports information has already done it?


The Lakers posted an overall record of 148-25-9 (.838), advanced to the national championship game once, made two Frozen Four appearances, qualified for the NCAA Tournament five times, were ranked No. 1 nationally in each season and won five College Hockey America (CHA) tournament championships and five regular-season titles. Immediately after Colontino returned to Mercyhurst as associate head coach, the Lakers went 32-2-3 in 2006-07, claiming the program record for victories, as they registered a nine-win improvement from the previous season and were ranked No. 1 nationally for 13 weeks. After a one-goal loss in the NCAA Tournament to the eventual national champions ended the Lakers' 2007-08 season, the 2008-09 squad reached new heights. Entering the NCAA Tournament on a 15-game winning streak, Mercyhurst advanced to its first-ever Frozen Four with a victory over St. Lawrence and proceeded to top Minnesota in a thrilling semifinal contest to move into the national championship game against Wisconsin. The Lakers were ranked No. 1 for 23 weeks the following season, went 30-3-3 and advanced to the Frozen Four for the second straight season before succumbing in overtime to Cornell.

Before that, the defensive and recruiting ace helped start North Dakota's women's program. And before that, he did another two years with the Mercyhurst women while earning his master's degree, which followed his Lakers playing career.

That wasn't the only coaching change, however. Brianne McLaughlin quickly joined Colontino's staff. The former Lady Colonials goalie, probably the young program's biggest claim to fame so far, holds the NCAA record for saves, was all-CHA first team and academic team...and oh yeah, became the first RMU student-athlete from any sport to compete in the Olympics, helping Team USA to silver in the 2010 Vancouver games. She won gold at the world championships this year, and because she's from Sheffield Village, OH, she gets a picture. 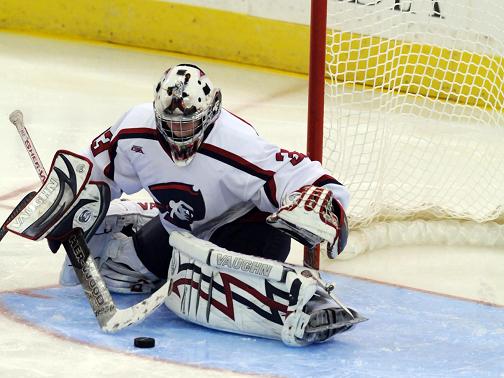 On the ice, the Ontario-laden Lady Colonials are led by sophomore forward - and CHA newcomer of the year last season - Thea Imbroglio (12-17-29 line in 2010-2011, good for second on the team as a freshman), sisters Brianna and Cobina Delaney (43 combined points last year) and Jamie Joslin, who set the RMU school record for goals by a defender last season. Meeri Raisanen (advancing that great tradition of Finnish goalies) and Kristen DiCiocco come in as the top two netminders.

From the Penn State side of things, it's fair to call the entire team an unknown at this point with fourteen new players (plus 16 returnees from the team that just missed a nationals bid last season), but early reports from head coach Josh Brandwene have praised the team's development and ability to assimilate information. For what it's worth Carly Szyszko, Kirsten Evans and Dana Heller are the three leading returning scorers while Lindsay Reihl, Sara Chroman and Allie Rothman held things down from the blue line. Katie Vaughan is the presumptive starter in goal after splitting time with departed senior Heather Rossi last year.

Chances in all of this? Well, don't hold your breath. Consider Josh Brandwene's words in a GoPSUSports.com video:


"It's a tremendous opportunity. It's a transition year for us, we're still a club program this season. And for a lot of these kids...seniors and so many others, this is going to be a once-in-a-lifetime opportunity. [We're] as big of an underdog as we can possibly be, everything to gain and nothing to lose, if we go out and play, and compete, and have an experience that's going to be valuable for us, really, honestly, no matter what the result is [it will be a positive experience]."

So don't count on a 1-0 start. But do count on a fantastic measuring-stick opportunity and an opportunity to learn from the people who have been doing the NCAA thing for a little bit now.

Oh, and by the way, in the event you're going to this one, get there early. The game will be preceded by the Pittsburgh Penguins Elite 19U girls - featuring PSU recruits Jill Holdcroft and Darby Kern - taking on Detroit Victory Honda at 4:30 p.m.
Posted by Kyle Rossi at 5:28 PM