The official site people followed up their press release introducing Taylor Holstrom, Justin Kirchhevel, Nate Jensen and Bryce Johnson by updating the team's "roster" to include (only) these four players, complete with profile pages. Pretty cool, and just one more thing reinforcing that this all, in fact, happening. That said, I still don't get the point of doing that now and with only those four. Clearly, there are others on the team this year, and there will be others on the team next year, some of whom <gasp> are playing on this year's team. Some order of explanation would have been nice there.

I have a confession. Whenever IcersGuy and I post on the same topic, I always end up kicking myself because he gets at a couple angles I didn't address. One he hits here: potential captains. In the spirit of conversation, here's one name to keep in mind: Justin Kirchhevel. I know he's new here, but the guy just oozes "captain," trust me on that. If it doesn't happen this year, I'm betting it will next year or the year after.

1. Labor Intensive
(View From the Booth)

I always feel like I short Steve Penstone in these posts, which gives him the slight edge for first star this week. He checks in from the first post-cutdown practice with Tommy Olczyk, Dan Petrick and Guy Gadowsky. I chose the Gadowsky one for the top because, hey, he's the coach. But also because he gave a lot of insight related to how the tryout process played itself out and the type of team we're trying to develop.

UAH Charger Hockey should soldier on and thrive!
(change.org)

I'm generally pretty skeptical of the effects of these types of things (case in point: I signed one for Wayne State women's hockey...how'd that turn out?). But at the same time, it only takes a couple seconds of your time and doesn't cost anything. Support our brothers in college hockey.

The UAH community continues to have TYT's best wishes in their efforts.

I have George's pink jersey from last year. So basically, we're boys. 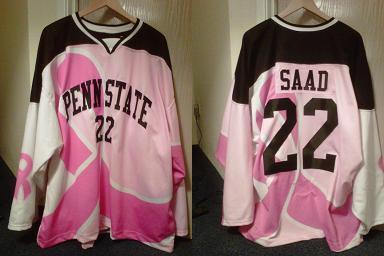 Oh, but hey, Collegian, you legitimate journalists might want to fix this.

Probably the two best write-ups concerning the women's team joining the CHA. Not surprisingly, they came from two sources who have an obligation beyond grabbing a couple graphs from the AP story.

Speaking of the CHA, here's someone who used to coach in it back when they had a men's conference, and who also made quite an interesting career move when Wayne State dropped their men's program in 2008. By the way, he has a career record of 0-1-0 against the Icers. And no, I don't miss an opportunity to mention that.

Nothing you don't already know when it comes to the Pegula Ice Arena, but broaden your horizons a little bit by learning about some of the other exciting arena projects in PA. Incidentally, that event at Hersheypark Arena scheduled for Saturday was ultimately cancelled due to the central Pennsylvania flooding.
Posted by Kyle Rossi at 11:50 AM