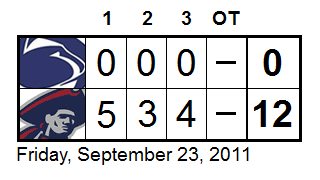 There's really no point in belaboring things, so I won't. We're not a DI team yet, they are. Even mighty Lindenwood learned the hard lesson of a transition in their NCAA opener against defending national champ Wisconsin.

If you really need to know the specifics for some reason, use the links above. But before I bury this one with the eulogy "well, it was a good experience, at least," here's the lineup Josh Brandwene used, which I'm throwing in because it's really the first look the outside world has received at anything resembling a depth chart including the massive recruiting class.

So some position changes, lots of newcomers, and oh, Christoffersen apparently unretired. Thanks for letting me know, world (still, it's great to hear).
Posted by Kyle Rossi at 11:53 AM