The big blow: Senior defenseman Dan Petrick is out six to eight weeks with a broken wrist. Also bad: Nick Seravalli's groin is bothering him. Slightly better: Chris Cerutti's recovering well from the MCL sprain he suffered on the first day of practice.

1. The Long & Winding Road
(View From the Booth)

P.J. Musico and Guy Gadowsky were Steve Penstone's subjects this week. Neither seems to mind travel.

Steve had a busy week, also sneaking in a three-parter - Part 1 / Part 2 / Part 3 is pending - with Joe Battista. In Part 2, Battista says he can't wait to share the plans for Pegula Ice Arena. Really? Then what's stopping you? Throw something out there on a site that probably gets more hits in five minutes than TYT does in a month, add the caveat that changes may still be made, and give people what they want. There is absolutely no harm whatsoever in doing that, and to claim otherwise - or to act like nobody's seen anything - is disingenuous. 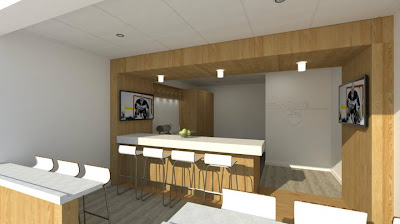 OMG WHAT'S THAT?!? Surely decoy mock-ups that PSU administration commissioned Crawford to complete with some of that $88 million just to throw bloggers off the scent.

Hey, remember that time that the SCSU president said that they wouldn't join the NCHC (despite not having been invited at that point)? Even more funny now.

According to the St. Cloud Times, St. Cloud State University will say 'No' to any offer to joining the new proposed "Super League". SCSU President Earl H. Potter III said today that, "We expected to be in conversations about being in a new league. But as we looked at it ... we intended to say ‘no.’ " Potter also stated, "We intend to stay in the WCHA and a take a leadership role to continue the legacy of the WCHA."

Two of my favorite hockey bloggers check in with some analysis. And believe it or not, Bowling Green has leapfrogged Notre Dame as the school everyone's watching right now. They have asked for and received an extension on the WCHA's deadline for accepting their invitation, which expired over the weekend. Will they (following Notre Dame's acceptance of an NCHC invite) take the 10th slot in the Axis of Evil? Will they take the WCHA invite after some deliberation? Will they, as WCHB suggests is a possibility, drop their program? Or...

...will they go ahead and start their own conference with Canisius, Mercyhurst, Robert Morris and Niagara, Air Force and...Buffalo? Buffalo? The Buffalo we beat for the 1989 ICHL championship at the Ice Pavilion? That Buffalo?


Oh, and guess what? This extended itself beyond the rumor stage Sunday when UB officials confirmed their interest. Get Buffalo on board, and the MAC is just two schools away (Kent State? Ohio?) from forming its own college hockey conference. Then Akron can elevate its ACHA D2 program. This is all part of my master plan.

Speaking of Canisius and at the risk of sounding like a guy who doesn't know where his DI programs came from, someone from the Golden Griffs camp has shamelessly requested that The Namesake pay for their arena as well. Despite compelling arguments like "the entire city of Buffalo thinks you're swell" and "we're Jesuit, you're Jesuit, so basically, you owe this to God," Pegula has yet to park the Sabres practice facility on their campus (although they are in something resembling talks to do just that).

As much as I hated the letter, I do quite like the little guys playing baseball at the top of the page.

Future opponent watch. Yep, they're still good. Oh and if you didn't click on the Buffalo thing above, they declined an invite to the meeting about that new conference.

New Icers coaches in process of transition
(The Daily Collegian)

I can't really explain why I like this story, but I do. Maybe it's the jumbo picture of Gadowsky in a PSU windsuit. Still hasn't gotten old.

Some interesting words from Beagan:

The Big Ten television network will eventually outshine ESPN, in my opinion, in terms of college sports coverage on television, and being as we live in a money-driven culture, by Notre Dame joining the Big Ten Conference they [Notre Dame] reportedly would increase their annual television revenue three-fold to what it is presently.

Guess they're doing a good job so far with the PIA.


Mortenson Construction has been awarded its second project with The Pennsylvania State University with the $5 million upgrade of the Artificial Turf Field, home of the men and women's lacrosse teams. Penn State awarded Mortenson’s Sports Group the construction of its new $89 million Pegula Ice Arena earlier this year.

Work on the Field upgrade gets underway this month on the University Park campus in Pennsylvania. The scope of work includes excavating and lowering the existing natural grass turf field, addition of a new artificial turf field, sports lighting, sound system, scoreboard, fencing, playing field accessories and netting. The project is scheduled for completion in December 2011.