Reed Linaker on The Pipeline Show 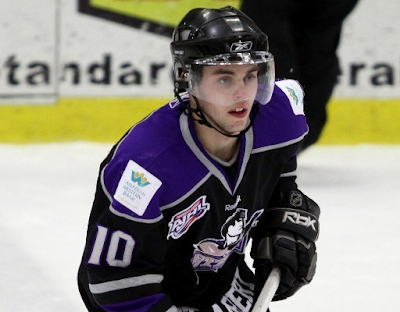 The following interview with Penn State 2012 commit Reed Linaker was conducted by Sherwood Park Crusaders broadcaster Taylor Medak and aired on the Inside the AJHL segment of The Pipeline Show Tuesday night. The audio is available for download here.

Taylor Medak: We'll start this week of Inside the AJHL with the spotlight on St. Albert Steel forward and Penn State recruit Reed Linaker. The 20-year-old is looking for a solid season and hoping to return to the form he was in 2009-2010, where the Edmonton native put up 37 goals and 81 points. Linaker has six points on the year, but the Steel have yet to find a victory, and that's a disappointing start for Linaker and his team.

Reed Linaker: It's been pretty frustrating, obviously I don't think our record shows how well we've played. We've been in a couple games, we just can't get any breaks. I know, myself, obviously only one goal in the first six games, it's been tough to get some goals, so hopefully we can just work our bags off here and ride it out.

TM: You're going to Penn State - basically, kind of go through the process of how they contacted you and maybe Guy Gadowsky talking to you, and what led to that decision.

RL: It actually came out of the blue. I was actually in some pretty serious talks with Wisconsin, then at the time, I got a phone call from Gadowsky and a week later he phoned and offered me a scholarship, so I mean, pretty tough to say no there. So I took a visit down to campus and just an amazing place there, so it's exciting, looking forward to going down there.

TM: Will you go right in once the Big Ten conference starts?

RL: They're going to be going Div-I next year, they'll be an independent, so we'll kind of tour around and play some teams, and my sophomore year they'll join the Big Ten conference. So I mean, it'll be a good taste to get your feet wet in Div-I hockey, because I know the Big Ten conference is going to be a pretty stacked division, so it'll be pretty tough for us our first year.

TM: And good exposure too. Do you think that will help not only bring exposure to you and your team, but the college game in general?

RL: Oh yeah, for sure. Obviously you're going to have big-name teams in big-name barns, a lot of high-end hockey players are going into some of those programs. So I mean, it'll be a good stepping stone for us to build off, because we play some of the best people in the country.

TM: Up against, tonight, future teammate Jessi Hilton. Do you guys know each other well, or do you - you know you're going to Penn State eventually, will you be friends then, or how does that relationship work?

RL: Yeah, probably then. I don't really know him too well personally, I've played against him all my life, but nothing too personally, so probably once we get down there we'll build something then.

[Note: Hilton committed to Penn State for 2012 over the summer, but his college plans hit a snag due to 12 games played with the WHL's Calgary Hitmen over two seasons. I have yet to receive confirmation that anything has changed on that front, although according to recruiting guru Chris Heisenberg and assuming a successful petition to the NCAA, he could be eligible to play for PSU halfway through the 2013-2014 season. That would be his sophomore year (the NCAA won't allow a redshirt to get around the issue), but as we all know, a short Penn State career is better than no Penn State career.]

TM: Did you get a chance to meet Joe Paterno when you went down to Penn State?

RL: We did actually, yeah. He was injured, so he couldn't go on the field, but I ran into him, so that's pretty cool. The guy's a legend in college football, so that was pretty nuts.

TM: Well Reed, good luck the rest of the way this year, I know it's been a tough start, but hopefully you guys come through, a lot of potential on this Steel team. We look forward to seeing you down the road at Penn State and hopefully beyond that.
Posted by Kyle Rossi at 11:12 AM