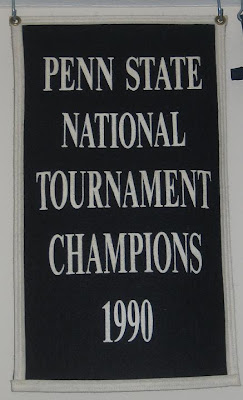 For anyone who has been following the Icers for 15 years or less, it's probably pretty hard to imagine a time when PSU was a decided underdog. But in 1990, that was exactly the case when the team departed for Athens, OH for the National Invitation Tournament (one of the national championship competitions prior to the ACHA's founding in 1991-1992). The Icers had but one national title to their credit at the time, and that was in 1984 when a competing tournament scooped up many of the nation's best non-varsity teams (Alabama-Huntsville also claims the 1984 club championship).

Three rather large upset wins later, Josh Brandwene, Ben Bouma and the rest of the 1989-1990 Icers had shocked the club hockey world. First up, Arizona on February 28th.


Penn State had not beaten the Wildcats in their past three attempts, including two overtime 7-6 losses a year ago. The Icers did not dwell on the past though. Trailing 5-2 after two periods, Penn State staged a third period flurry, scoring four goals. A power-play score by Dave Murphy combined with goals by Mike Cardonick and [Chris] Cervellero knotted the score at five. Meanwhile goalie Eric Zinczenko dominated the third period defensively, making 15 of his 31 saves in the last 20 minutes. Finally with just 1:06 left in the game, Lance Riddile, assisted by John O'Connor, knocked in the game winner.

The next day, the hosts came calling. And what probably could be considered the unofficial beginning of the Penn State-Ohio rivalry.


The Bobcats came into the game with a three-year home winning streak and a 24-1 record.

"They are a bigger, stronger, and more talented team than we are," [coach Joe] Battista said. "This game was not supposed to be close."

"After Martha's goal the team gathered in front of our bench and jumped on one another," Battista said. "The OU crowd was stunned."

Bobcat penalties and fatigue led to their demise as Penn State turned a 3-3 first period tie into a 5-3 shocking upset. John Ioia's power-play goal at 9:11 of the second period proved to be the game-winner.

"We used every trick we know to frustrate them," Battista said. "We suckered them into taking penalties."

These penalties led to three Icers' goals. However, goaltending not offense preserved the victory. [eventual tournament MVP John] Gray, starting only his fifth game in goal, made 49 saves. After the first period, Gray slammed and locked the door on the Bobcats. Ohio University had never been shutout in a period at home before. Gray did so twice in succession.

If that game was the Penn State version of the Miracle on Ice, much like the U.S. upsetting the Soviets, it's lost to history without finishing the job against the Finns...errr...Iowa State.


The game, like all the others, was tightly played. Second period goals by Midge Hutchison and Chris Cervellero gave Penn State a 2-1 lead. However with just 1:15 left in the second period, Iowa State tied the score. Freshman Jim Adams, who had not scored a goal the entire season, put the Icers ahead 3-2 early in the third.

"I had told him earlier in the year that he would get one when we needed it the most," Battista said. "Before he went out on the ice I told him that I wanted that goal now."

With 10:06 to play Iowa State again tied the game. However with just over three minutes left Andy McLaughlin netted the game-winner.

John Gray was outstanding in goal, stopping 35 shots. "With the pressure he was under, it was remarkable," goalie coach Ray Lombra said.


One other extraordinary thing about the tournament run is that the Icers were able to win the title despite losing a game to Wisconsin-Whitewater on March 2nd, an outcome made possible by the tournament's two-pool, round robin format and the fact that PSU had already clinched a spot in the title game.

In another bizarre quirk of those days, the Icers were a rare champion of anything that didn't win their last game of the season. The International Collegiate Hockey League tournament was held after the National Invitation Tournament, and, well...


The strain of playing eight games in 15 days finally took its toll as the Icers fell to Conestoga, 2-0, in the ICHL semi-finals The loss gave the club a No. 3 finish in the ICHL and left it short of a successful defense of its championship, which went to Niagara with a 5-2 win over Conestoga last night.

"You don't want to use that (fatigue) as an excuse, but there's no way you can avoid being somewhat tired from all the games," defenseman Davis Mulholland said. "It just gets very grueling ... Whether we had gone to nationals, whether that would have changed things or not, we'll never know."

Mulholland was (sort of) alluding to the 1988-1989 season, which saw the Icers decline an NIT bid in a successful effort to gear up for the ICHL playoffs.

The banner itself is essentially identical to one I already shared in this feature (a 1992 ICHL championship version), so I'm going to plagiarize myself. I feel like I was a better writer back in February anyway, so I might as well end this post the same way as I did back then.


Well, there's a reason I waited until the end to talk about it. I assume they were given to members of the team or something. I have no idea though. A bunch of years later, someone found a box of them somewhere, and they sold them at a game. I bought one. It measures about 9.5" x 17.5" and is made of a felt-like material that may actually be felt for all I know about fabric. Riveting stuff there.