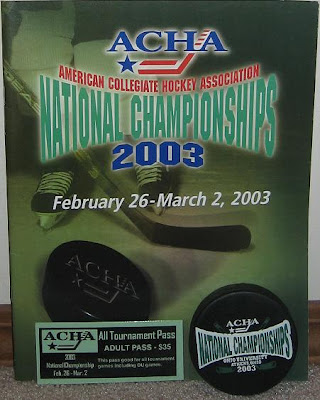 Since we're going to Athens, OH this week, I decided to drop another one of these with a theme - stuff from the last time OU hosted nationals (forever, until they add a sheet or the format changes). Program, ticket, puck if you can't tell. I hope you can, because you have no idea how hard it was to get that picture. Flashes reflect off of pucks, glossy paper and plastic. No flash, and it looks like it was taken in the Ice Pavilion.

Illinois, Penn State, Delaware and Ohio advanced to the semifinals by virtue of beating both of the other teams in their respective pools. In the Icers' case, this involved scoring two goals in the final 5:13 to force overtime against Iowa State, where Josh Mandel buried the winner 2:46 in, much to the dismay of the ISU hockey cheerleaders. Goaltender Scott Graham, to Blue White Illustrated:


"With five minutes left I had serious thoughts in my mind that our career and season might be over. That first goal was a huge relief. The second goal to put it into overtime, seeing that made me realize this team was meant to win one more year."

True to Graham's words, the Cyclones proved to be the Icers' toughest challenge. A 5-1 win over Delaware in the semifinals followed, and after that game and an OU upset of top-seeded Illinois, Penn State faced the Bobcats in the championship game. Even though that game wasn't ever really in doubt - PSU won 5-0 to earn a fourth straight/most recent ACHA title - the normally hostile atmosphere in that place reached an unprecedented intensity, both on the ice and in the stands. Joe Battista (from this point forward, I'm not attaching a title to him, you know who he is) told the Centre Daily Times shortly afterward that this enhanced the victory.


"You always hate to compare victories, but this may be the sweetest because we shut out Ohio in their rink, in front of their crowd, and the fact that it was four in a row. We have a senior class that knows nothing but how to be a champion."

Had the CDT cared to ask me for a quote, it probably would've read a little differently:

In the aftermath, I may have been an accomplice to a theft of some signage. Unlike the job I pulled solo six years later, this one wasn't my idea, and I am not in possession of the property.

Epilogue: The place you can't get to without driving through West Virginia (even if you live in Ohio) exacted some revenge for the sign thing and my constant hate-on when my car ended up in a ditch alongside I-77 on the way home. Guess they got that second sheet after all.
Posted by Kyle Rossi at 8:43 AM