You know how I (used to) say "split with Ohio/Delaware/Rhode Island and we'll be fine" at least 17 times a week? Well, the major flaw in that logic was that it assumed wins against, among others, a dangerous Robert Morris, Pennsylvania ACHA version, who the Icers play four times this semester, starting tonight at 10:00 p.m. and tomorrow at 3:00 p.m. at the RMU Island Sports Center.

I've always thought that Robert Morris (the guy) must have been pretty badass to have two completely unrelated universities named after him, the one PSU is playing this weekend and the one in Illinois, which also happens to have an ACHA Division 1 team. So let's examine. 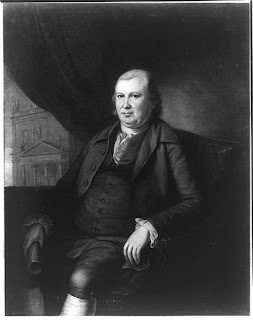 ﻿
﻿Ummm...okay. At least he laid off the powdered wig, if not the powdered doughnuts. Although there is this:

You stud. But then there's this:


On July 1, 1776, Morris voted against the Congressional motion for independence, causing the Pennsylvania delegation, which was split 4-3, to cast its vote in the negative.


The following day, Morris and John Dickinson agreed to abstain, allowing Pennsylvania to vote for independence.

Possibly the first waffling politician in US history. To his credit though, he waffled all the way and became the Terry Pegula of the Revolutionary War by giving George Washington enough money to allow him to continue sniping limeys. He's also one of only two people to sign all three of the Declaration of Independence, the Articles of Confederation and the Constitution. Well done.

So basically, Robert Morris was a colonial from Pennsylvania, not an eagle from Illinois. Therefore, I'm declaring that PA's RMU is the real one, and only RMU (IL) has to tote the parentheses on this blog from this point forward. And that has absolutely nothing at all to do with the fact that PSU plays the real one a lot more often than (IL), making it waaaaay easier on me.

Back to hockey. Here's why I called the Colonials dangerous before the tangent: they're completely done with both Delaware and Rhode Island this season. They sit at No. 17 with an 11-10-0 record, knowing that they probably have to get to No. 12 to make the ACHA championship tournament. With no disrespect intended to Stony Brook and West Chester, the Icers are RMU's one big chance left to move the needle (okay, maybe a little disrespect was intended, but not in a malicious way) - and they have four chances to do so.

The Colonials certainly know how to score goals. After being shut down in a season-opening sweep at the hands of Delaware, RMU has scored 4.67 per game in seven games since against the ACHA top ten, including four games against URI, two more with the Blue Hens, and one with Minot State at the ACHA Midwest Showcase. Those last two games with UD in particular put the team's offense on display, as the Colonials were able to go blow-for-blow with the Hens on both Friday and Saturday until Delaware's superior talent and depth finally took over late.

Bryan Chiavetta and Luke Bennett are two guys who do a lot of that goal scoring. Chiavetta is the program's all-time leader in both goals and points and led all of D1 in goals last season, while Bennett just took over the program's number two spot in points against W&J last weekend (source: this, plus some subsequent box scores and basic arithmetic). This season, the duo's combined 27 goals represent 29 percent of the total for a pretty offensive-minded team.


“From watching him play it’s clear that he is very talented. From the short time I have interacted with him and his teammates I’ve found that he’s a great kid with a very positive attitude. He is clearly a leader who enjoys helping and playing with his teammates.”

Matt Javitt, Beau Roeder, Trey Milstead and Zach Stern are most of the secondary scoring on a team that has more of it than you might expect outside of the ACHA's top programs.

There's something I didn't mention above when I was discussing RMU's goal output against top teams - they only went 2-5-0 in those seven games where they scored 4.67 per game against the top ten (2-7-0 counting that opening weekend). This due in pretty large part to their giving up 5.86 goals in those games. Since 5.86 is more than 4.67, that generally doesn't work out very well for them. In fact, second and third goalies Phil Salerno and Brent Baburich have combined for about 44 percent of the minutes in net and both have a goals against north of six. In recent weeks, Salerno has split starts with Robbie Fallick, the usual starter prior to that. Kory DuMond, Paul Dittrich and Tim McDonough headline the defense group.

Bottom line, and like I said in the aftermath of last weekend's uglyfest, the Icers desperately need two wins. New rankings are out after these games, and anything less than that probably puts PSU out of the top 12 and no longer in control of their destiny. Additional items on the wish list: results for Coach Balboni's tweaking of the power play, a quality start from Teddy Hume if he gets one and an offensive resurgence from a couple guys like Dom Morrone, who has three points in the last five games after 19 in his first 12 this season.

VFTB explains why last weekend was rough for the Icers beyond the scoreboard and also interviews the highly-quotable Paul Daley.

The Collegian pumped out a tremendous mid-week piece on captain Marek Polidor. And here's their pre-gamer.

I won't be able to do live updates this weekend, since I won't be able to watch the games live. I'll pass along whatever I do see from other sources on Twitter or Facebook. This also affects my Weekend Observations post on these two games, which will be late because I'll have to watch both games Sunday, then grind out some thoughts. That's essentially what I did for the URI games back in November while jacked up on lots of caffeine, and it wasn't a complete disaster. But anyway, probably Sunday night on that one.
Posted by Kyle Rossi at 10:23 PM