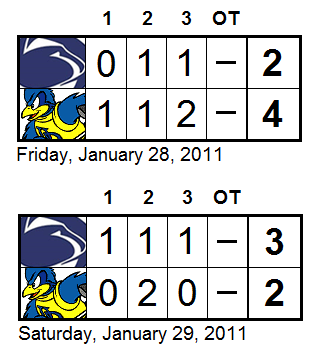 I think more that anything else, my No. 1 observation this weekend was the way hockey can get you riding the emotional roller coaster.

Circa Friday night, I was pretty upset. I was ready to tee off on a lot of things, both specific and general. A 2-7-0 record against the top ten this year (at that point) will do that to you, especially when your introduction to Penn State hockey was sometime during the whole ten championship games in a row thing.

Now, all of a sudden, I feel mostly okay. We survived a very good Delaware team with a split. Next week's opponent, the last in the gauntlet, hasn't exactly looked like world beaters without their World University Games players. Nor has Iowa State, one of the teams chasing the Icers for positions in the rankings, who managed two tight wins against ACHA D2 Colorado State over the weekend. In short, I'm no longer legitimately worried about Penn State needing one of these for their next trip to Newark.

Don't get me wrong, it's not all sunshine and puppies. I'm still not convinced that we're able to compete with the top of the ACHA when the stakes are equal for both sides. I'm disappointed that we're treating squeaking out a win to possibly save a nationals bid after being outplayed for the majority of the weekend as some kind of epic victory. I despise that we let the Blue Hens get in our heads and spent much of the two games tossing cheap verbal barbs their way. Or something a little more than a barb, like Marek Polidor at the end of the second period Saturday.

That's not the Penn State I know. But for this week at least, the full rant was postponed.

Okay, on to the actual game stuff...

Much like last week, the unheralded guys really stepped up for the Icers - go no further than the bookend goals on Saturday for evidence of that one.

First was Mike McDonagh, one of last weekend's heroes. He pounced on a neutral zone turnover, came in alone, was denied by goalie Nick Casella, then scored following up. Casella thought it was kicked in - don't ask me to judge things like that watching over the internet - but the officials disagreed. The game winner came off the stick of Mike Broccolo, who had a great weekend against West Chester too, just without the scoresheet cred, at the end of a tremendous shift by he and linemates Joe Zitarelli and Nick Seravalli. Broccolo actually came hard on the forecheck and made an interception to start that entire sequence. Well earned.

Much credit is also due Paul Daley. The guy found himself in the middle of a firestorm this week, but responded with a good weekend, particularly on Friday, when he had a hand in both Icers goals, including his score in the second period that tied the game, briefly, at one. And much like Broccolo last weekend, his efforts went beyond his point total. He's just one of those guys who plays well with a chip on his shoulder, clearly not for everyone, but it works for him.

Dan Petrick had an interesting weekend, to say the least. On Friday, Peter Crampton's eventual game winner bounced in off his body. Then on Saturday, he was victimized on Delaware's first goal when he lost track of David Conte. He counterbalanced this with saving a goal off of the goalline in the first period Saturday and by his generally steady play that makes him a personal favorite.

Matt Madrazo? Do I even need to talk about him anymore? Kid's a flat out stud. 79 of 85 for the weekend.

One major minus on Friday goes to Dominic Morrone for his senseless late-game penalty. How bad was it? Well, let me put it this way. Official write-ups are always dry and facts-only, right? Well, not in this case - the Delaware site's official write-up took the time to rip him.


In the games critical minutes Tasker continued his superb play, getting physical with Penn State forward Dominic Morrone. Morrone, a well-known hot head, took a terrible retaliation penalty giving the Hens a powerplay with just over five minutes remaining. Tasker buried a rebound off a one-timer blast from the point by junior Jason Michaud (Kennebunk, ME) just after the man-advantage had expired, locking up the 4-2 win for the home team.

The timing of the penalty was an absolute back-breaker to begin with - Penn State had cut the deficit back to one and was pushing for the tie. Then the Blue Hens compounded the error by scoring four seconds after the penalty expired in what I like to call "bonus time," those few seconds between the end of the penalty and the man getting back into the play. Steve Penstone said on the broadcast that a penalty should have been called on the initial coming together to which Morrone was responding. I didn't see it well enough to comment, and I'm okay taking his word for it, but you still need to keep your head.

To me, one final storyline for Friday's game was second chance opportunities. The stats say that Delaware outshot Penn State 40-27, and that advantage came in part because their attempts came in twos and ours came in ones. A lot of that is a credit to Delaware goalie SJ Broadt, I thought he was a vacuum cleaner on Friday, and what rebounds he did give up were quickly cleared. As a big believer in the value of getting to the front of the net, I'm also a big believer in the idea that the quickest way to shut down an offense is to not give them a reason to go there.

The Icers now go back home for two - it's been a while, the home games against Delaware were our last full home weekend - against Rhode Island for alumni weekend. I'll get a little bit into the Rams, both in the World University Games and not, as the week goes on, but the initial impression based on their games without the four players in Turkey? We can beat them, twice.
Posted by Kyle Rossi at 8:48 PM