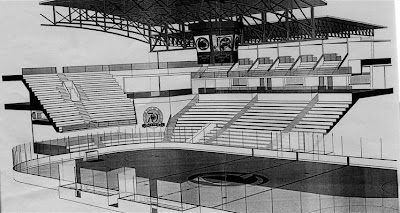 TYT's working name for Penn State's coming ice facility might only have 11 days left to live. Thanks to some Pronchik-fast turnaround from the Collegian's Tony Barton, we now know that:

Penn State Associate Athletic Director for Ice Arena Operations Joe Battista said in an e-mail Monday the Penn State's ice arena will be named at the next Penn State Board of Trustees meeting scheduled for Jan. 21.

He would not specify whether the name would be corporate sponsored or not, saying the decision, "is in the hands of the Board of Trustees."

That's the whole thing for now, so no need to click the link unless you prefer the Collegian's site design, hate my commentary, or both. Without a doubt, the name will be Pegula-influenced. Those things tend to happen when people by that name drop $88 million to pay for the whole thing.

Obviously, I prefer "Pegula Center," which is why I've used it here. I've heard "Pegula Arena" kicked around in some places, but I've never liked it as much because of the "double-uh" sound bridging the two words, and because it doesn't as accurately reflect the multiple uses of the facility.

It should be pointed out that the Office of Physical Plant's long list for the project, issued on September 2, 2010, used the title "East Resources Arena" (page 4). This, of course, refers to Terry and Kim Pegula's former company, sold to Royal Dutch Shell for $4.7 billion last May. That specific name is obviously unlikely for that reason, but don't rule out one of the Pegulas' other business interests working its way into the name (editorial comment: "Yuck").
Posted by Kyle Rossi at 3:56 PM