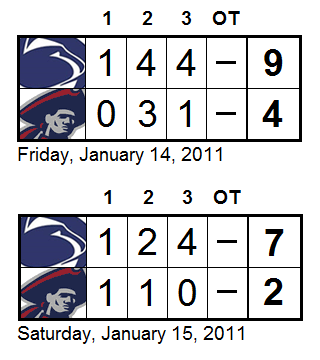 When I previewed these games on Friday, I laid out a sort-of checklist of things I wanted to see this weekend, so let's start with that. How'd we do?

Two wins. Obviously, we accomplished this one. The importance of the sweep should be clear if you take a peek down the road at a much-improved West Chester this weekend (more on that Thursday), at Delaware the weekend after and Rhode Island the weekend after that, before circling back around to our home games against RMU to complete our ESCHL season and our ACHA national championship tournament resume. The first three of those will pass without coach Scott Balboni, Tim O'Brien and Eric Steinour as they head to Turkey for the World University Games. URI gets hit even harder than PSU, as they lose four of their best players, but neither Delaware nor West Chester has anyone on the team.

Losing either of these games would've been an unmitigated disaster, plain and simple. We have it tough enough the next few weeks.

Results from a re-tooled power play. The pure numbers say 5-of-11 for the weekend, and while that's obviously outstanding, to me it even goes beyond that. The Icers failed to score on the first two Friday night, however you could see that the units were composed and confident, in contrast to what we saw last weekend. I firmly believe that you can have a good PP opportunity that doesn't end in a goal, and these both qualified.

Let's take it one more step. On Friday night, Robert Morris closed to within one (3-2) at 11:11 of a wild second period that featured seven goals. 1:39 later, PSU's went on the man advantage and quickly shut the "Let's go Bobby Mo!" guy up for 10 seconds (which I suppose is his usual interval anyway) when Tim O'Brien's point shot deflected off Dominic Morrone, then found George Saad's stick with a gaping net in front. The Colonials never got closer than two the rest of the way. The PP also helped blow open Saturday's game - which was 3-2 Icers after two - with third period goals from Michael Longo and Paul Daley

Offensive resurgence from some of the secondary scorers. I mentioned Morrone by name at that point, and he answered with three goals and an assist. I should do stuff like that more often, because I'm absolutely positive that Morrone read my post and took out his anger at me on the back of the net behind Phil Salerno. Yeah, that's exactly what happened.

Another guy it was nice to see on the scoresheet: Steinour, who tallied shorthanded Friday just after Paul Daley foiled the Colonials' breakout with a takeaway. He then added the eventual game winner Saturday by going hard to the front of the net and getting rewarded with a gino on a pinballing Saad shot. That goal ended a flurry of three goals in the first 4:28 of the period - not an unusual occurrence in a weekend filled with Jeremy Roenick-in-NHLPA '93-like scoring (clip rated TV-MA).

Longo and Joe Zitarelli chipped in late goals Saturday. Saad had two goals Friday and added an assist Saturday. Basically, the Icers' always-vaunted balance was back in force.

A quality start from Teddy Hume, if he gets one. Well, he didn't. Dan Ivanir did, which I see as a good thing, just because he's sort of been the forgotten man in all of this mess but has played well whenever called upon. The sophomore played effectively in his first action since November 5th when adjusting for RMU's offensive prowess, before suffering some leg cramps and giving way to Matt Madrazo late. Madrazo then started (and finished) Saturday and shut the door. So has Ivanir replaced the struggling Hume in the rotation? It's probably not that simple - after all, PSU has more than two quality goalies, and making sure none of them collect rust is a pretty challenging juggling act. The picture should become clearer over the next few weeks with no games available for "it's been a while and he's been working hard, let's try him out" starts.

A few other items of note from the games:
﻿
﻿
You want a big-picture look to close the post? Too bad. You're not getting one right now because, honestly, it would be foolish of me to try. VFTB had this to say about it:


As I said in Saturday's wrap up, I think the sweep should keep the Icers at or near the 10th spot in the next rankings, which will come out on Friday as the Icers take on West Chester in a home-and-home series.

Hard to disagree. With the exception of No. 14 Iowa State and their sweeps of RMU (IL) and Illinois, I don't know that any bubble team distinguished themselves either way during this ranking period. Co-No. 10 Oakland lost one game, but it was to Division 2 Grand Valley State. No. 9 Oklahoma was 3-2-0, but four of the five games were against top tennners Minot State and Arizona State. We know what PSU did. All of which probably means the next ranking, at least the part we're concerned with, looks a lot like this one. Whatever the coaches make of that mess, we'll know exactly where we sit Friday, at which point we can reset everything.
Posted by Kyle Rossi at 11:38 PM