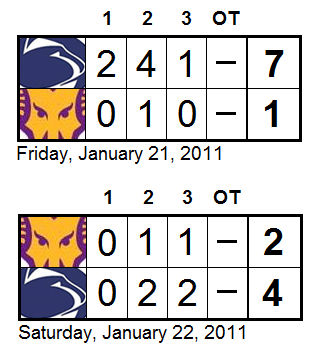 Harsh? Maybe. But the opponent I saw this weekend, while improved, didn't really appear to have taken the quantum leap forward that I had expected. I was sweating these games a little, in all sincerity, especially with our suddenly-questionable depth at forward and the consequences of dropping one of them in mind. As of right now, it's a tough call to determine whether that win over Rhode Island was due to URI playing down to their opponent as they've been known to do, or something larger, like WCU improvement.

Just about the only thing that qualified as adversity over the weekend came on Saturday midway through the second period. With Penn State up 1-0 and on a 5-on-3 advantage looking for more, Dan Loucks tried to force a shot though a man and then had to take a penalty to prevent a breakaway the other way. Once the WCU penalties ended, the Golden Rams' Chris Gentile, one of their bevy of new additions this semester, quickly tied the game at 1 on the ensuing power play. However, the Icers got the goal back just 29 seconds later when Chris Cerutti banged it home, so no lasting damage done there.

Major blemishes were a rarity for a defense corps that hasn't seemed quite at ease all season, and they faced a player shortage of their own with Kevin Miller out for the two games. Still, they did an effective job keeping a WCU team that had seemed to learn how to score off the board (just one even strength goal over the two games). And for the first time in what seems like a while, they chipped in some offense -  examples being Rich O'Brien's goal and Dan Petrick's two assists in Friday's barrage.

"Step up" was more or less the Icers' motto this week with the team depleted of players and a head coach due to the World University Games and injuries, and many did not disappoint. Foremost among those players has to be Mike McDonagh and his hatty in Friday's game. And beyond the fact that the three goals happened has to be their timing and execution. The first set the tone just 1:24 into the game. The other two came over a 55-second stretch midway through the second. This part of a four consecutive from Penn State to put the game out of reach after the Rams had cut the Icers' lead to 2-1 early in the period. All showed a willingness to plow some dirt in front of the net. McDonagh added an assist Saturday and therefore added 50 percent to his scoring total this weekend.

The Massachusetts native talked to Rodney Martin during the second intermission Saturday and didn't seem to be bothered that his goals are called garbage goals by some (myself not included).

Well said, sir. It was guys like McDonagh that allowed acting coach Josh Hand to spread the big guns throughout the four forward lines. Kurt Collins joined Cerutti and Marek Polidor on one of them. And while McDonagh partnered with Dominic Morrone and Paul Daley to do more than their share of the scoring (four goals, five assists between the three of them), I thought another group, Chris Pronchik-George Saad-Michael Longo, was quietly just as effective in a more defensive role Saturday. It was that line that sparked a sluggish start to the game with a dominant shift midway through the first period. Late in the game, after West Chester narrowed the deficit to two on Tom Scocozza's power play marker, the members of that line were prominent in a shutdown role lines reconstituted for that purpose. And the goal from the group turned out to be the game winner.

That goal, off the stick of Longo, was one of many rebound goals over the weekend, which might shed some light on how Randy Japchen ended up going from the USHL's Waterloo Black Hawks to West Chester in two seasons. The Icers' shots came in twos a lot of the time, which is a pretty good way to find offense under somewhat uncertain circumstances. Japchen was great when the rebounds were cleared, such as on a Polidor wraparound attempt early Saturday or on a Daley breakaway later in the game. So I suppose we also saw how he was in the USHL in the first place.

There were no rebound issues in the opposite net, where Matt Madrazo resides. Both starts, 58 saves on 61 shots, and zero drama, which is the way you want it to be. His trademark confidence even extended to his offense, when he made a Ron Hextall-style attempt on the empty WCU net late in Saturday's game that was ultimately knocked down in the center ice circle (said Madrazo afterward: "It was going in.").

The end result of it all - Penn State's winning streak doubling from two to four over the weekend. While I'm not delusional about what we've done or who we've played, it does feel nice to have genuine momentum for the first time since October.

That said, it now gets real in a hurry with the two teams sitting on top of the ESCHL up next. First, the Icers travel to Delaware, who is fresh off of the total annihilation of Washington & Jefferson. Next, Rhode Island comes in for alumni weekend. With all due respect to Robert Morris and West Chester (decide for yourselves how much that is), teams of their caliber have never been the issue. Penn State's 2-6-0 mark against the current ACHA top ten is the issue (put that together with 15-1-0 against teams out of the top ten and it seems the Icers are ranked pretty appropriately). So I don't think it's an exaggeration to say that the next two weekends have an awful lot of say in how this season ends up.
Posted by Kyle Rossi at 9:49 AM