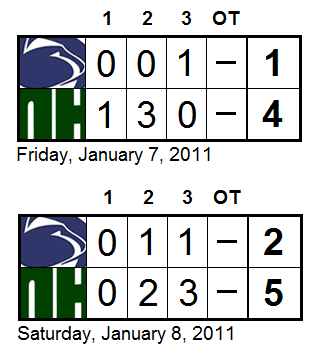 So what now? I don't know. I do know what not now - a hotel room in Newark, DE. I haven't booked one yet. I thought about doing it this week, I didn't, and I'm now glad I didn't. Not because I don't think the Icers will be there, I still do, but there's that little twinge of doubt now. The twinge of doubt that comes from the master plan you had laid out for the semester derailed on the first weekend.

Some of you are probably asking "what's the plan now, genius?" I'm going to get out of the plan business for a little bit and just say that we gotta win games. Plain and simple. The Icers visit Robert Morris (PA) next weekend, and the Colonials are a dangerous team. I'll get into why a little bit more as the week goes on, but you can start with the fact that they manage 4-5 goals against the likes of Rhode Island and Delaware with some regularity. So get two wins there, then we can start talking about the big picture again.

Okay, as much as I don't want to, I have to talk about the games. It's the unpaid job I hired myself to do, after all. If you don't want to read about the games, here's a link to a video of a talking (and swearing, fair warning for the kids) cat. Enjoy.

I really don't have too many answers right now, and there wasn't all that much good to take from either game. I'm still a little stunned as I'm writing this. But let's talk it through and see what comes out. I'll start things off by tooting my own horn a little. On Friday, I said:


The ability of Penn State to break through [OU's penalty-killing forwards] with a sort-of-struggling power play might be the key to these two games.

Bird Arena has a neutral zone about the size of Greg Windsor, which really makes games there play out almost like that inferior sport of basketball - you generally have to be able to create offense and defend it in the half court to have success. And this is multiplied by about a billion when you have an extremely physical game filled with penalties. In other words, you're going to need to cash in your power plays, and Penn State didn't, going an anemic 1-for-13 over the two games. The one came in Friday's third period, after the game was probably lost, when Chris Cerutti redirected Tim O'Brien's point shot (shortly after Dominic Morrone made a great play to keep it in the zone, I always like to point those out).

It seemed like we struggled with OU's aggressive forecheck for long stretches - when we established ourselves in the zone, we were able to move the puck effectively and get it towards the net, but that didn't actually take place very frequently.

Flipping that around a little bit, Penn State took entirely too many bad penalties, defined for my purposes as retaliation. Kevin Miller was a culprit in that department Saturday, taking three of them. I'm sure you're aware of the phenomenon of "beer muscles," but to me, Ohio's always had "Bird muscles." In that barn, in front of those fans, and especially when playing Penn State, they're a different team than when they come to the Ice Pavilion or when we happen to meet at nationals. The bad penalties sort of indicate to me that we weren't ready for the Bird muscles and weren't ready to fully match their intensity, especially on Saturday.

Some guys that did: the line of Morrone, Chris Pronchik and Paul Daley set a good tone early on Saturday. Tim O'Brien, who always brings it, was in on all three goals over the weekend. I thought Carey Bell stood out among a group of defensemen that had a pretty rough go of things generally. Penn State was outshot 86-42 for the two games - I'm not sure when I last saw that stat that lopsided against the Icers, if ever.

The ongoing goaltending saga was once again a storyline as well. I don't know how to psychoanalyze goalies, I'll get that out right up front, but here's what I saw out of Teddy Hume on Friday: a goalie that can still play, but still has pretty fragile confidence. He was good at the outset - really good actually - as OU dominated early. He was in control, out in the white ice, reading plays well, not giving up rebounds. Even after the first goal, he remained unrattled. That came about because the Icers missed chances to clear, and two great passes and a flat-footed defense later, Michael Schultz was alone in front, where he made a nice move around Hume.
﻿
﻿
That was frustrating. But Hume shrugged it off and continued to stand tall, even stoning three decent shorthanded chances on one PSU power play late in the first. The backbreaker, to me, was the second goal, five minutes into the second period. This time, Pilmore finished off a scamble in front that started with a Zack Barbis blast from the point on the power play. Two more goals shortly after - Zach Tisdale collecting garbage on the backhand, and Schultz with his second off a clean faceoff win by Rostek 17 seconds later - and Hume was done.

Matt Madrazo came in and shut the door the rest of the way, then started and finished Saturday. The kid played his guts out too - Tim Thomas style - and his 38 of 42 stat line (along with 19 of 19 Friday) doesn't do him justice. He even managed to block out the OU fans in Section C telling him various things he allegedly likes to do with donkeys long enough to pull off something that has to be a highlight for any goalie - making a save so fantastic that the goal judge deems it impossible and activates the red light anyway. In between the great saves was Schultz from Pilmore three times, Barbis with a laser that Madrazo actually got most - but not enough - of, and Jared Fuhs on an empty net.

Remember at the beginning of the post when I said I was out of the plan business? Well, just in case you aren't:

I'd call that textbook "muddled" (nice game there Saturday, Rhody), but probably a net loss for the Icers, with Illinois taking down No. 1 (ending a 17-game winning streak in the process) and ISU sweeping a quality team. Like I said before though, none of this matters if we don't start collecting Ws in a hurry.

Reminder to OU fans: In two years, we'll have an NCAA program and construction of the best facility in the country underway. You, on the other hand, will still be in the ACHA, will still choke at nationals every year, and will still be completely irrelevant, except when people are confusing you with Ohio State.

Finally, one more thank you is in order to Steve Penstone for inviting me on during the first intermission of Saturday's broadcast - I sincerely hope your equipment survived my nasally voice! For the uninitiated: here's the recording, my segment starts 36:45 in.
Posted by Kyle Rossi at 1:51 AM