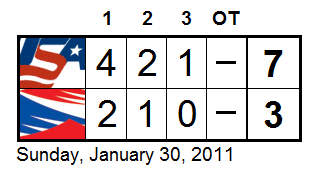 Here are the highlights from the FISU...

...and the USA Hockey recap.

"The entire team played great and you could see our confidence building as the game went on," said Dave Debol, head coach of the U.S. Men's National University Team. "This game was pivotal for us. We put ourselves in a good spot, and now we have to compete well against Spain on Tuesday like we did today."

Slovakia opened the scoring 3:12 into the first period, but Team USA answered just 29 seconds later with Macari's first tally of the game. Kyle Krannich (Mendham, N.J./ University of Rhode Island) then gave the U.S. a 2-1 edge just over two minutes later, when he scored shorthanded on a breakaway.

With Team USA on the power play, Macari extended the U.S. lead to 3-1 at the 11:44 mark of the opening frame. Two minutes later, Team USA gained a 5-on-3 man advantage and Ciaverilla notched the eventual game-winner.

Slovakia scored on the power play with just over two minutes remaining in the first period, but the U.S. carried a 4-2 lead into intermission.

Brandon Contratto (West Bloomfield, Mich./ University of Michigan Dearborn) notched an early second-period goal on a breakaway to give Team USA a three-goal cushion. Slovakia narrowed the margin midway through the frame, but the U.S. answered with a goal two minutes later at the 11:21 mark. Tyler Pilmore (Sylvania, Ohio/ Ohio University) sent a feed to Steve Balint (Grosse Ile, Mich./ Lindenwood University) at the hash mark, who fired a shot past Slovakian goaltender Peter Pus to give the U.S. a 6-3 lead.

Team USA will next face Spain in its final preliminary-round game on Tuesday (Feb. 1) at 9 a.m. EST.

Despite the seven goals scored by Team USA, neither Tim O'Brien or Eric Steinour recorded any points...O'Brien earned a +1 for the game by being on for Michael Macari's early first-period goal that evened the score at 1-1. Both players were on successful power play attempts as well, first O'Brien on Macari's second goal that made it 3-1 11:44 into the game, then Steinour just over three minutes later when Tom Ciaverilla scored with a two-man advantage...in all, O'Brien recorded four shots on goal, Steinour one...Steinour was 2-2 on draws, O'Brien won both of his attempts.

In an extremely physical game (90 total penalty minutes), Slovenia used Klemen Sodrznik's hat trick to help blow out South Korea 10-2...Spain goaltender Ander Alcaine Val turned in one of the tournament's best performances so far, saving an incredible 64 of 65 shots. However, Eduard Mazula's third period goal was enough for Kazakhstan, and an empty netter provided the final 2-0 margin. Kazakhstan has yet to surrender a goal in the tournament.

With two of three group games complete for each team, some scenarios are developing. Russia has clinched a quarterfinal spot and looks like the No. 1 seed going in with a likely sweep of Group A and the goal differential they'll build up by beating Turkey 20 or 25 to 0. Kazakhstan is a win against Slovakia away from likely taking the No. 2 spot, while Canada, Belarus and now Team USA also look good to make the quarterfinals. The Japan-Czech Republic tilt tomorrow may prove to be an elimination game, but then again, maybe not, with both teams carrying hefty goal differentials. Thanks, Turkey.

For the Americans, a regulation win against Spain gets them in and with six total points - ideally, this will be enough to get up to the No. 5 seed, avoiding some of the top teams, but there's still a lot yet to be decided before anyone can make a call on that. 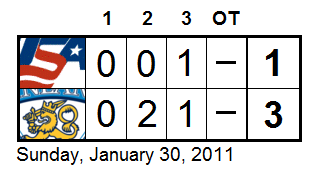 While the loss stings, it probably has to be considered a nice showing against the defending bronze medalists. We'll once again let USA Hockey tell the story.﻿﻿

ERZURUM, Turkey – Megan Winters (Basking Ridge, N.J./ Northeastern University) scored late in the third period to bring Team USA within one goal, but the U.S. Women's National University Team dropped a 3-1 decision to Finland here today at the 2011 Winter World University Games. The U.S., which is competing in the women's tournament for the first time, now has a 1-0-0-2 (W-OTW-OTL-L) record.

After a scoreless first period, Finland gained a 1-0 lead at the 4:44 mark of the middle frame. The goal was reviewed for a possible high stick, but remained as called on the ice. Finland scored less than three minutes later to take a 2-0 lead into the second intermission.

Team USA started the third period with a 5-on-3 penalty kill. Then, with only 2:51 remaining in regulation, the U.S. reduced Finland's lead to 2-1 while on the power play. Shea Crawford (Selbyville, Del./ Lindenwood University) sent a pass to Winters, who fired a slap shot past Finnish goaltender Anna Vanhatalo for the score.

The U.S. sent an extra skater to the ice with 1:25 left in the final frame, but Finland notched an empty-netter to seal its 3-1 victory.

Goaltender Heather Rossi (Effort, Pa./ Penn State University) stopped 34 shots in the loss for Team USA, while Vanhatalo made 12 saves in the win for Finland.

It was again Heather Rossi's turn between the pipes, and she responded tremendously, with 34 saves on 36 shots (the third Finland goal was on an empty net). Both Finnish goals against Rossi came among a bombardment of 16 shots during the second period...Lindsay Reihl committed a high sticking infraction at 5:15 of the second period. The penalty was killed, although Finland scored 11 seconds after it ended while she was on the ice...Denise Rohlik did not record any statistics.

Non-competitive games were the order elsewhere. ﻿﻿﻿﻿Canada got revenge on Great Britain for that whole colonization thing to the tune of 14-0. Candice Styles had four of the goals, Breanne George added three more and two assists and Andrea Boras assisted on five. Shots on goal were 48-4...Slovakia beat Turkey even worse than that - 20-0. In a game full of gaudy scoring numbers, Martina Velickova's four goals and four assists stand out. Shots in this one were 73-6.

Even with two games left in the round robin for each team, it's pretty easy to see how things are shaping up.