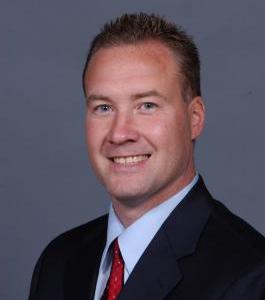 When I look for coaches for this series, I tend to keep an eye open for ones with experience starting up a program, or in the case of a guy like George Gwozdecky, kick-starting a sort-of-new program that had yet to taste success. Current Robert Morris head man Derek Schooley is certainly one who fits that category.

One way he doesn't fit in with many of the coaches I've looked at: he's more of an up-and-coming type than an already-accomplished type. There's a chance of him putting in more than a decade at PSU. He has an infectious enthusiasm for what he does. The guy even tweets, and is about 20 times more engaging than most coaches who do so. To that point, here's a couple of his beauties from last week, when RMU was prepping for North Dakota (here and here).

Preparing for the long trip to Grand Forks..HUGE challenge this weekend against No Dak Fighting...whatever they are called now

will usa hold on for bronze? Hopefully the 2 No Dak players will play a ton & be too tired to play this weekend

The first one, of course, alludes to UND's well-documented nickname situation, the second is a reference to the two Fighting Sioux (still the name for now) on Team USA at the 2011 World Junior Championships.

Also, and just in the last week-plus, he's given movie reviews (Inception and MacGruber), admitted that Jersey Shore is a guilty pleasure of his, wondered if he and his son made the final cut of HBO's 24/7 series covering the Winter Classic and suggested that his team only deserved to lose 5-1 in a game they lost 8-0.

I don't bring that up just because it cracks me up (although it does), but because it demonstrates an important personality trait. I know who George Gwozdecky is, you know who George Gwozdecky is, but does the average might-go-to-a-game-might-not fan in Boalsburg know who he is? Is a "name" in college hockey a "name" in the mainstream? Probably not. I think the personality of the coach (along with, you know, whether the guy is a good coach), is vital towards building interest in the crucial first few years. I don't think anyone who's seen Joe Battista, his magnetic personality, and its impact on the Icers can really disagree with me there.

Quick bio time. After a great run playing at Western Michigan ended in 1994, Schooley had a brief minor league career (including the 1996 Colonial Hockey League championship). He then broke into coaching with one-season stops as an assistant with the NAHL's Chicago Freeze and Cornell, before hooking up with his former junior coach Frank Serratore at Air Force, where he served as an assistant for five years, from 1998 through 2003.

The goals against records are impressive, as is the nationwide recruiting of players able to hang academically at a service academy. No doubt the brass at Robert Morris agreed when they made a guy with no head coaching experience the first coach of the new program in August, 2003. Schooley spent a year recruiting the team that took the ice in 2004-2005, a pattern being followed at Penn State.

The progression since then might not be readily obvious, but it's there. Improved records in each of the first four seasons to a peak of 15-15-4 in 2007-2008. After what appeared to be a step back and plateau for the next two seasons, the program is breaking back through this season with a 12-7-2 record so far, and a steady presence in the others receiving votes section of the national polls.

One possible explanation for the rough spot from 2008-2010 is the dissolution of Robert Morris' original conference, College Hockey America, and the resulting impact on recruiting. It could have spelled disaster for the young program, which had already watched conference mates Findlay and Wayne State fall by the wayside. Schooley, however, kept the ship steady and helped get the Colonials into Atlantic Hockey in early 2009, where they are now playing their first season. Shortly after admission into Atlantic Hockey, Schooley had this to say.


We were focusing all our efforts on being in Atlantic Hockey. If not, we'd have had to go back to the drawing board. And what that included, I had no idea.

That's the nice thing about this — I don't have to worry. Until you get the answer, obviously you're concerned, because you want to see your program be in the best scenario you can be. I was extremely happy once we got the word. Seeing our president, our AD and support of the community at the press conference, everyone is ecstatic.

Even if the records haven't always reflected it, Schooley has proven able to get the Colonials playing at a high level. Notable along the way:
Pretty impressive for a new program from a small conference playing with fewer scholarships than most. Impressive enough to be entrusted with the $88 million dollar investment? That remains to be seen. But whether he ends up at Penn State or not, it should be fun to track the trajectory of his career and his program.
Posted by Kyle Rossi at 12:05 AM