The Time Niagara Bailed the Icers Out 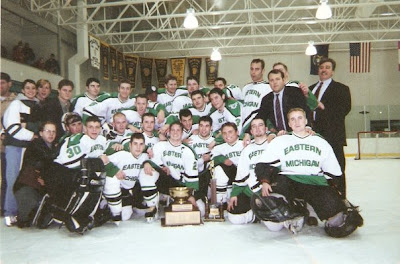 There was once a time when it happened, believe it or not. What could Niagara possibly have done for Penn State? To tell that story is to tell the story of a third team, the Eastern Michigan Eagles (nee Hurons).

EMU was generally a very solid team that finished in the ACHA's top eight every season from 1989-1990 through 2002-2003. For a brief moment in time, they touched greatness. The Eagles came within 1:05 of beating the Icers for the 2000 national championship, before Todd Dakan sent the final to overtime, where Alon Eizenman won it. They rolled to 34-3-2 and a No. 1 ranking in 2000-2001 - a season that was abruptly halted by No. 9 Delaware in one of the great upsets in ACHA tournament history.

So what happened to all of that? Well, uh, this.


The team was suspended from the university club league for four years [in November, 2003] for violating the university's student code of conduct that forbids hazing, according to The Ann Arbor News.


Reports indicate the incident occurred Sept. 12, when a public safety officer spotted smoke while on patrol near a house in the 500 block of Pearl Street, according to the paper.

At about 1:45 a.m., the officer saw a man walking across the street in a party dress but found the fire had been put out, the paper reported.

One occupant of the house told the officer the hockey team was initiating new members. No one would identify the residents of the house, except to say they were hockey players, the paper reported. The officer told the paper the residents were apparently having fun with new members, "running through the streets in dresses and receiving odd haircuts." The officer reportedly talked to several men in the house who were wearing dresses. One also had a sexual slur written in black marker on the back of his legs, according to the paper.

Oh, ok, carry on. Or not, if you're EMU hockey. Ultimately, the punishment was reduced from the ridiculously excessive four years down to just the rest of the 2003-2004 season, with a probationary period in 2004-2005, during which the Eagles were ineligible for the ACHA tournament.

All of which is well and good, but what about the Icers, who had the Eagles scheduled for the at-the-time customary home weekend on the first weekend in December, 2003? In comes Niagara, willing to play two at the Ice Pavilion roughly 22 days after the EMU story broke. Without the Purps stepping up to help, the Icers would have gone from Thanksgiving weekend through January 9th without playing a single game. And while those games (5-1 and 9-1 PSU wins) didn't directly lead to Niagara's appearance on the schedule each December, it at least served as a sign of things to come.

The epilogue to the EMU tale: The reduced sentence still decimated the program, to the point where they're well on their way to a fifth losing season in six years, after having one in their entire pre-suspension history. Backlash from former players has led to an "I played for EMU Hockey when they were good" group on Facebook. Just be careful before you join, because Paul Fassbender will ferret out any impostors.


Why is Rob Cupit in this Group. He is still playing. I think they have won 10 games the last three years combined

Ouch bro. You going to take that from a guy who probably wore a dress at some point?
Posted by Kyle Rossi at 1:55 PM