On Monday, we checked in with the Lady Icers at the semester break. Here's a quick look at how the ACHA Division 2 Ice Lions and the ACHA teams sponsored by four of Penn State's Commonwealth Campuses stand halfway through the season.

Before we get into it, I'm pre-emptively apologizing for any minor factual inaccuracies contained within. Information on these programs can be pretty hard to come by, especially at the D3 level, where I had to combine the incomplete work of a few different websites (which often disagreed with one another) into what's hopefully a generally accurate end product. In one case, Brandywine's game against Robert Morris on December 5th, I was unable to find a final score, so I completely ignored it with respect to the team's record. Other than that, I believe everything I'm saying to be correct while at the same time acknowledging the chance that it's not.

None of that is meant as a criticism of these programs, as I'm sure they all do a tremendous job with what they have available to them and represent the university well.

You know at the end of Identity, when you think Amanda Peet is the serial killer's surviving personality, but it turns out to be that kid? Not John Cusack or Ray Liotta, but that stupid kid you forget even exists until the end of the movie? That's sort of how I feel about the Ice Lions. I mean, really, raise your hand if you had the Ice Lions as the last surviving ACHA team at University Park. @ACHAInsider on Twitter says that's exactly what's happening.


Just heard #Penn State will NOT keep their ACHA D1 team when NCAA team is formed. Will consolidiate to one team at the D2 level

The (allegedly) new ACHA banner-carriers at PSU find themselves 10-4-3 at the break, and No. 10 in the Southeast Region of Division 2. Included in that mark: a stout 6-4-2 against teams ranked in the top 15 of their respective regions. Two of the four losses came after a 6-2-2 start, when the Ice Lions were obliterated by a combined 17-2 count in two games at Southeast No. 7 Ohio State.

Showing tremendous resilience, Penn State rebounded to win the next four, including a three-game sweep at the MACHA Showcase against Rowan, St. Joseph's, and Temple. Of particular imporance was the St. Joseph's game, a 4-2 win behind two goals from junior Ryan Gannon.


Friday and Saturday were games they knew they should have won, sophomore goalie Ryan DeMuth said. Playing St. Joe’s definitely provided a preview of what to expect when the two teams face off again on January 30, DeMuth said.

“We know we can beat them again,” DeMuth said.

Following the showcase was a road showdown with Southeast No. 2 UMBC to close the semester where, despite holding a 4-2 third period lead, the Ice Lions fell 5-4 in overtime. Still, playing one of Division 2's best to a near-stalemate might help fuel a strong close to the regular season - something the Ice Lions need to stay in the regional top 10 and qualify for the regional tournament February 25th through 27th, hopefully leading to the ACHA National Tournament in San Jose March 15th through 19th. 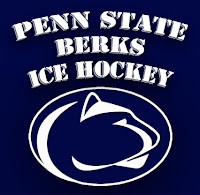 Two years ago, in just their second season at the D1 level, the Blue Lions posted a good 20-8-2 record and backed into the 16th seed at the 2009 national championships when host John Carroll declined their bid. The "run" ended with a first-round 14-2 trashing at the hands of eventual champion Lindenwood that took two days.

Since then? 6-15-1 last year, and 0-13-1 so far this year. So much for momentum. What happened? Well, if you believe message board chatter, former coach Eric McCambly had big aspirations (of the NCAA Division III variety) for Berks. Then he jumped ship to Canton when he found that those aspirations were more in line with Canton administration's goals, leaving his former program in turmoil. The story doesn't really fly considering current coach Sandy Cohen was in place for that good 2008-2009 season. More likely, it has a lot to do with Berks joining the ECHA this year, and while schools like Navy, Drexel and Towson are cannon fodder for the Icers, it's much tougher competition than former Berks conference mates Rutgers, Cornell and St. Bonaventure.

With a roster that includes exactly one senior, the Blue Lions will be looking for small victories during the spring to build for next year and beyond. The remaining schedule is highlighted by a trip to Navy's historic Crabpot Invitational on February 26th and 27th. Behrend began the season well enough, winning two against Canisius on September 11th and September 24th. Since then, however, it's been mostly downhill, to the tune of 2-10-0 since the opening games. The 4-10-0 overall record includes a 1-8-0 against College Hockey East competition. With four of those losses by one goal and two others by two goals, the Behrend Lions have been competitive, just unable to turn the corner. Jordan Shelleby (8 goals, 9 assists) and Nick Winarski (8 goals, 6 assists) lead an offense that seems to score even when losing big. Bryan Massey and Ryan Naples split goaltending minutes straight down the middle, although both have struggled.
The second half schedule includes a trip to the University of South Florida Charity Tournament in the Tampa Bay area January 14th through January 17th.
Behrend also sponsors a team in the lower-level College Hockey Association, although at 1-9-0, they haven't fared any better.
Penn State Altoona (ACHA Division 3)

Behrend's conference rivals are 8-8-2, and 5-3-1 in College Hockey East to sit atop the South Division. Altoona is unique among teams in this post in that they have one more game remaining in their first half, tomorrow night at Robert Morris (PA - DIII version).

The team struggled early on with top competition (witness a 12-0 loss at the hands of North No. 1 and last year's national runners-up Hope on October 15th), however, three wins against teams in the Atlantic top 10 since November 19th are evidence of improvement. The biggest of these might have been a shootout win over Richard Stockton, behind two goals and the skills competition winner from Jamesy Rossi. This comes in addition to winning both games against Behrend this season, always a priority for the Blair County crew.

Following a trip to St. Vincent College to open the spring semester January 16th, Altoona has the advantage of playing six straight home games to close out the regular season - which may prove important as the current No. 6 team in the Atlantic Region tries to maintain a grip on a spot in the regional tournament. In particular, home dates with Atlantic No. 1 California (PA) on January 29th and South No. 14 Liberty on January 21st and 22nd loom large.
Penn State Brandywine (ACHA Division 3)

Brandywine is another team with its sights set on the Atlantic regionals, as they currently sit in a tie for 10th with Pitt-Johnstown thanks to a 13-10-1 record, although with losses in five of their last seven and nine of their last 14, they appear to be trending in the wrong direction. The slide includes a combined 2-5-1 in three recent tournaments - the SUNY-Albany Tournament, the Atlantic City Showcase and their home PSU Brandywine Tournament.

The good news: Brandywine closes the regular season with seven games, four of which are against teams they have already defeated this season by a combined 13 goals. Also, Brandywine defeated Pitt-Johnstown 3-2 behind a goal from Tom Elmer with 5:07 left in the teams' only meeting this season, which should provide an advantage in a possibly tight vote to determine the final regional top ten. Vincent Masciantonio and Dan Di Monte power the offense along with Elmer, and the team receives quality goaltending from Kevin Lowthert.
Posted by Kyle Rossi at 9:04 AM