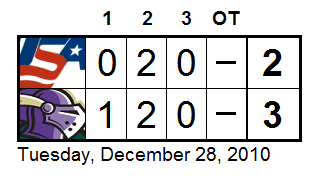 Despite losing in this second game of the pre-tournament Vermont series, there's a lot to like about the WUG team. It has an extremely deep forward group that can be assembled in a number of effective ways, defensemen that contribute to the attack without sacrificing much at home, and stout goaltending. A lot of this led to long stretches of dominant play at even strength against NCAA Division II Saint Michael's.

However, it was following one such sequence from Team USA to start the game that the Knights ended up with the game's first goal just 2:17 in, a transitional effort off of a rebound on the other end that saw Alex Davidson streak down left wing, fight off defenseman Jacob DeSano to get the puck to Michael Jangro, who found Fran Briand in front to cash it in.

That lead held up until 9:07 of the second, when a strong US forecheck led to another series of repeated chances. In this particular instance, Rhode Island's Devin Sheehan went cross-ice to Icer Tim O'Brien in the right-wing circle. O'Brien then found Brandon Contratto on the doorstep, and he made a nifty move to get the puck around Saint Michael's netminder Brendan Rimmer on the glove side.

However, much like yesterday's game against Castleton, penalty issues would again haunt Team USA. But unlike yesterday, the ACHAers didn't have a four-goal margin for error. Just 14 seconds after Contratto's goal tied things up, Alan Dionne took a boarding penalty. That one was successfully killed, but 38 seconds after that kill ended, a tired PK had to go back to work following Michael Macari's hooking infraction. A 5-on-4 quickly became a long 5-on-3 when Mercyhurst's Mark Loecher also went off for a hook 24 seconds later. The Knights took advantage with goals on both ends of the two-man advantage from Reave MacKinnon and Colby MacDonald 19 seconds apart.

Another similarity to yesterday was the fact that both Penn Staters on the team were involved in the scoring. Team USA cut the deficit to 3-2 when Eric Steinour found Adrian's Tom Ciaverilla in the slot with a quick pass off the rush, and Ciaverilla beat Mike Dizgun, SMC's second goalie. Steinour and Ciaverilla joined Kevin Kranker on what was generally the WUG team's best line throughout the game.

One interesting aspect to this game was the use of an experimental rule enforcing icing at all times, even against a penalty kill. The NCAA had considered making it a universal rule change in the offseason, before an extreme uproar caused the rules committee to back off, ratifying it only for exhibition contests such as this one.

If there was a reason for people to be concerned about that rule change, it certainly wasn't demonstrated by Team USA's power play. It was 0 for 5 on the evening (1 for 11 when adding in the Castleton game) and was especially out-of-sync on the first three attempts, where the US struggled getting set up in the zone, and once there struggled to hit the tape with consecutive passes. The last two were much better - including 10 shots on the last one, which started under somewhat controversial circumstances. SMC recap:


The best chance for Team USA came when sophomore Tyler Pilmore cruised on a breakaway with two Purple Knights trailing closely behind. [Morgan] Bell dove to disrupt Pilmore briefly, allowing Saint Michael's sophomore goalie Dizgun to make the save. Bell got called for tripping on the play, which had the Team USA bench screaming for a penalty shot. After the officials discussed the play, it was determined that the trip happened after Pilmore took the shot, which allowed the Purple Knights to kill the penalty and hold on for the win.

In all, Dizgun was bombed with 21 shots on goal in the final frame (to just four for the Purple Knights). However, none found the back of the net, including during a frenetic extra-man push as time expired.

One final note: I'm sorry if I misidentified any players in this post. I tried to corroborate with the box score and other accounts where I could, but that wasn't possible in every case. Why am I apologizing? Well, look at what I was working with - and no, play-by-play was not included.


Next up, of course, is the showdown with Vermont tomorrow night at Gutterson Fieldhouse. Win (!), lose close, lose big or draw (?), it will be one of those events that will come up in message board arguments for years to come. Regardless of what happens, it's hard not to be encouraged with how the WUG team is shaping up - as long as it stays 5-on-5.
Posted by Kyle Rossi at 11:11 PM