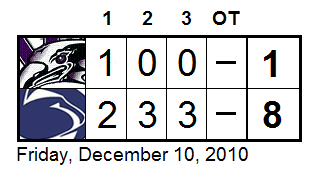 So that's pretty much what we all wanted to see to close the semester, is it not? The Icers were flat-out dominant against an overmatched opponent. Shots were 54-16 PSU. Power plays were 11-3 PSU. Fights were 1-0 PSU. It wouldn't be a Niagara game without one of those.

That last statistic is courtesy of Marek Polidor, who didn't take too kindly to Niagara's Frank Cosentino taking a run on his goalie, Matt Madrazo. Polidor scored the quick takedown, and until the two were separated, used the opportunity to try caving Cosentino's face in, cage and all. I guess that's okay if you keep your gloves on. The captain was tagged with a game disqualification in addition to the major and will miss the spring semester opener, at Ohio on January 7th.

I don't think I talk enough about Polidor, so I'll take the opening here. While I'm sure this isn't a universal opinion I'm sure, Polidor's actions to me were just the latest captain-ish move in a long series of them - he makes as many effort plays as anyone on the team, and takes up when things need to be taken up. And in this case, not only did he have a teammate's back, but he may have jump-started the team in what was a 2-1 game at the time. The Icers didn't score on the power play from Cosentino's goalie interference, but they did on one that began 47 seconds after that one ended, with Niagara's penalty killers undoubtedly in need of some oxygen.

Perhaps I'll change my opinion if Ohio ends up torching our PK in that Friday game without Polidor's efforts in that department, but for now, it was great for the team.

Speaking of the power play, am I worried? Taylor Cera's goal on the power play after the power play was Penn State's first in 12 attempts. Two more followed. The second came after 4:08 of consecutive power play time, 1:31 of which was 5-on-3. The third - Mac Winchester's first PSU goal, congratulations on that - was on the 11th man advantage at the end of a blowout game. I'm not trying to sound dismissive of successes, just realistic about the circumstances. All in all, the Icers are three for the last 18 (16.67 percent).

The old adage says that your goalie has to be your best penalty killer, and Dane Wakefield certainly was that for Niagara. I've seen a good number of goalies on underdog teams come into the Ice Pavilion and play well under adverse circumstances over the years, and despite the eight against, Wakefield's on that list. I'm not trying to sound dismissive of failures, just realistic about the circumstances. To me, the puck movement was there, the chances were there, Wakefield just stopped them. Tip of the hat to the kid. Worried? No. But definitely something to watch going into the spring - you can't play the "hot goalie" card every single time, after all.

And how about that puck movement (I am on with my transitions today)? An inordinate number of Icers goals came off of outstanding passing plays., many of which involved the top line of Chris Cerutti-Tim O'Brien-Paul Daley. A couple of those worth highlighting:
Defense and goaltending? Not really a ton to talk about there, thanks to that 54-16 on the shot counter. I picked on Kevin Miller last week, so I should point out that he did a couple nice things to keep the play alive on the Morrone goal I just talked about. That seemed pretty typical of this game - little plays to feed the offense that don't result in scoresheet credit (other than Winchester's goal, and a Rich O'Brien assist, of course). They also did an effective job keeping Madrazo clean for the most part.

Madrazo got his third straight start, so it's obvious his status as starter wasn't affected by last Saturday. The freshman was flawless, other than a deflection on a Niagara power play that he couldn't do much with, and played the puck out of trouble several times. Wandering goalies always make me nervous, but hey, Madrazo doesn't seem to have nerves, so why should I?

Your quick status check: the Icers are 13-5-0, ranked No. 11 (with another ranking due out next Friday), and face a brutal January schedule. For my part, I'll continue with my regular series (Payday Memorabilia and Head Coach Candidate) through the break, as well as update the first semesters for the Lady Icers, the Ice Lions, and some of the commonwealth campus teams. And there's always those WUG tune-ups, including the tilt with Vermont.
Posted by Kyle Rossi at 12:19 PM