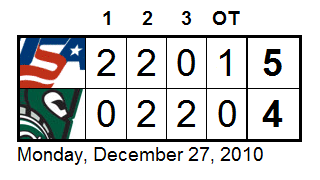 Because the game was not broadcast in audio or video form, I'll have to rely on the accounts of others who saw it live to write this post. One such person is the guy running the ACHA Men's Division 1 Twitter account (@achamensd1), who I'll quote heavily here, along with the recap from the Castleton side, linked above. Team USA jumped out to a 4-0 lead midway through the second, partly on the strength of first-period goals from Icers Eric Steinour and Tim O'Brien.

Just because this is a Penn State blog after all, here's a more detailed view of those two goals, courtesy of the CSC write-up.


Team USA broke through just over 13 minutes into the contest as Eric Steinour (Carlisle, Pa./Penn State) scored off a rebound. Michael Lepre (Kent, Ohio/Kent State) rifled a shot from the point that Castleton goalie Seth McNary (Woburn, Mass.) turned away stick-side, but Steinour was able to control the loose puck and beat McNary high on his glove side. Tim O’Brien (Bethel Park, Pa./Penn State) made it 2-0 for Team USA, converting with less than a minute to go in the opening period. O’Brien received a centering pass from Alan Dionne (North Scituate, R.I./Rhode Island) and bounced the puck off McNary’s pad and in.

With those first assists to Lepre and Dionne, some early validation was provided for the way the roster seemed to be assembled with a large number of offensive defensemen. Western Michigan's James Telfer added a breakway goal early in the second, and Team USA looked to be in cruise control. Starting goalie Erik Hudson from Iowa State gave way to Drexel's Dan Pyne midway through the game after a perfect 12 saves on 12 shots and Adrian's Tom Ciaverilla scored on a give-and-go with Oakland's Kevin Kranker for what appeared to be an insurance goal and a four-goal lead that held up into the last five minutes of the second period...

...then the penalty troubles started. First, it was CSC's leading goal-scorer Stuart Stefan with a power move around Oakland's Jacob DeSano on a delayed penalty to make it 4-1. Next up, Steinour and Dionne simultaneously took 5 and 10s for contact to the head at 18:20 (don't ask me how that went down with nobody sitting for the Spartans). While the extended 3-on-5 kill should probably be considered a success in the grand scheme of things, as it ultimately could have been crippling, the Spartans did chip another goal off of the lead on a redirection by Justin Alonzo.

Team USA carried the 4-2 lead into the third period, but two more power play goals from Ryan Delorme and Brett Zeggil brought Castleton all the way back to even with 4:40 left in regulation.

Ironically, it was penalties to the Spartans that stemmed the tide and allowed Team USA to sneak out of Rutland with the win. Castleton took 19 minutes in penalties in the last three minutes of the third period, resulting first in a 5-on-4 power play late in the third, then a two-minute 5-on-3 to start overtime after CSC took their own contact to the head major and a tripping minor. Just when it looked like a glorious opportunity might be squandered, Michigan-Dearborn's Michael Macari banged home a rebound of a Telfer shot to lift the WUG team to victory with 34 seconds left on the major and 1:07 left in overtime.

Next: a 75-mile trip up US Route 7 to St. Michael's College for a game with the Purple Knights tomorrow night. The SMC people say that one will be broadcast on FastHockey, but as of right now it doesn't appear on FastHockey's schedule. So we'll see.

UPDATE (12/28, 8:50 a.m.): Poster dabears17 on Hockey101 offers some insight regarding those USA majors late in the second, the first of which involved PSU's Steinour:


first 5 minute was for contact to the head, the second was for face washing infraction

So it sounds like Steinour with a dirty hit, Dionne with a facewash in the scrum that undoubtedly followed the whistle.
Posted by Kyle Rossi at 11:03 PM