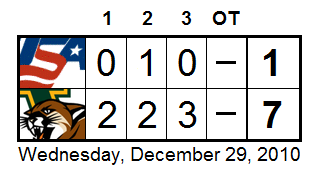 It wasn't that bad.

That's what kept running through my head as the clock melted away at the end of this one. Not a horrible thought to have either, considering I spent most of the first intermission desperately looking for the clip from Miracle of the 1980 US Olympic team getting shelled by the Soviets at Madison Square Garden in one of their final pre-tournament tune-ups. Hey, it was a pretty bad first period.

Despite a similar-looking margin on the scoreboard in the last two periods, Team USA played much better over the final 40 and spared themselves that indignity. Still, the 1980 comparison might not be entirely inaccurate, and when thinking like Herb Brooks, scheduling this game makes a lot of sense in hindsight. Team USA is unlikely to face anyone better than Vermont over in Erzurum. To that point: co-WUG favorite Canada is sending a team of stars from the Ontario University Athletics conference of the CIS over to Turkey. The CIS is on a level slightly beneath a major NCAA program like Vermont, so call a team of OUA stars equal to Vermont.

You can quibble with my order of the hockey universe I suppose, but either way, we know where the bar is and the distance between it and Team USA.

The game itself went much as most expected. UVM's Connor Brickley, fresh off of being one of the last cuts from the US National Junior Team, took out his wrath on the USA Hockey crest to the tune of two goals, an assist, and the game's first star.

He was far from alone on the scoresheet, in fact, every Catamount forward registered at least one point in the game. HT Lenz and Sebastian Stalberg each put up a goal and an assist. Tobias Nilsson-Roos, Jack Downing and Drew MacKenzie were Vermont's other goal scorers. Nilsson-Roos' effort was particularly devastating to Team USA's hopes of putting up a competitive result, as his centering feed bounced off of bodies in front and past goalie Erik Hudson 6:03 into the second, just after the WUG team had played arguably their best stretch of the game.

But enough about that, go read a recap or a Vermont blog for more on how awesome they are. Or you can rewatch the webcast if condescension towards an overmatched opponent is more your cup of tea.

For somewhat obvious reasons, I spent a large chunk of the game concentrating on the USA defense, and believe it or not, I liked a lot of what I saw. Alan Dionne was Team USA's best player in this game in my opinion. He was steady in his own end, and generated a good amount of offense on the other, although none of it ended up in the net, largely because of the US's inability to get traffic down low, especially early on against UVM star goalie Rob Madore. Dionne's Rhode Island defense mate, Dan Lassik, was the quiet partner but also extremely effective - in fact, he earned a +1 rating in a game his team lost 7-1. Dionne was not on ice for any Catamount goals, Lassik was only on ice for Brickley's first period power play tally. And these were the guys logging the most ice (probably) on the back end - not too shabby.

Others weren't quite as good. Jacob DeSano had a rough three games as a whole, and Kent State's Michael Lepre, a guy I actually like a lot most of the time, had a brutal game. He looked physically out of place at times, and one of his turnovers led directly to Brickley's second goal. Maybe I'm being homer-ish here, but I can't help but think this team might be able to use the steadiness of a guy like Dan Petrick (a team alternate) somewhere in the bottom four.

Back on the positive side - Team USA got stellar goaltending from Erik Hudson when Vermont was dominating play early, including spending 40 percent of the first period on the power play. His 25 saves, 28 shots stat line probably doesn't do it justice, considering the quality of many of the 28. Dan Pyne also played well over the second half of the game.

Speaking of that much-maligned (by me, anyway) penalty kill, it was great tonight. It looked like the coaches were trying several different combinations in that area, and most of them were effective, resulting in a 4-for-5 effort, even with the no icing on the PK rule in effect against a Division I opponent. I'll take that. Both shorthanded and at even strength the forward group played disciplined, positionally sound hockey, and the result was several races won to loose pucks, taking away some second and third chances for UVM.

I haven't mentioned the Team USA goal yet (yeah, that kind of game), but it came off the stick of Kevin Kranker after Tom Ciaverilla won a battle in the corner and got the puck to Kranker in the high slot, who then beat John Vazzano through traffic.

Kranker almost had another goal in the first period, when Madore shot out of the net to win a race to a long stretch pass to prevent a breakaway. The puck deflected to Kranker, who was following the play up, but he misfired on a gaping net from just inside the blueline. He made up for that late in the second period when he retrieved a loose puck from a vacant crease to save a goal.

The Michigan-based line of Michael Macari, James Telfer and Brandon Contratto was also pretty good throughout, totaling eight shots as a group.

Finally, not much to report from a Penn State standpoint.

Oh well, still a good pre-tournament series as a whole for both of them, and considering reasonable expectations, for the entire team as well. Here's hoping for a payoff from these games next month.
Posted by Kyle Rossi at 12:08 AM