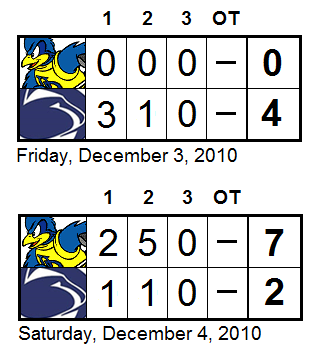 I'll be honest, I have no idea how to write this post. Generally, I'll try to handle both games simultaneously while looking for common themes and storylines. However, Saturday's game was pretty much the exact opposite of Friday. In a sense I guess, the Icers tied the weekend. They say a tie is like kissing your sister, but I've never bought that expression, because the implication is that kissing your sister is part good.

It almost feels like I have to veer in one direction or the other, and in this case, I think it's okay to keep it generally positive. I admittedly would have been okay with a split coming into the weekend, and a split is what we got. Consider that:
One huge positive that extends well beyond these two games: the return of all injured Icers.

"George," of course, is George Saad, the extremely talented but frequently injured forward. He made his return to the lineup from a deep thigh bruise this weekend, and it was clear pretty much from puck drop Friday that this was not to be a token appearance. Saad made the effort plays early on - diving to clear the zone and stripping the puck at the blueline and dumping it back to allow a line change that wouldn't have happened otherwise.

Then the offense started. First, it was a nice pass from the corner to a driving Taylor Cera, a fellow injury returnee, for the first goal of the game. Later on, Saad came in one-on-one with freshman Delaware defenseman Kevin Redmond, who might as well have not been there. Saad knocked Redmond over, regained control of the puck and scored. He added points on both Icers goals Saturday as well, including a goal when a Rich O'Brien blast went wide and rebounded from the end boards on to his stick.

Despite Hand's comment and Saad's play, Tim O'Brien showed that he has no plans of relinquishing any "best player" titles, at least not until he graduates. He made a great individual play of his own, a steal that ended up Delaware goalie Nick Casella after he circled around to the slot and fired it home. Then, he spent the next eight seconds of game time winning the faceoff, cruising down the ice, taking a pass from Eric Steinour, who won a battle along the boards, and scoring again. We now call that Pulling a Longo.

Just about the only thing O'Brien did wrong Friday night? His awkward-looking goal celebration after his first goal. Whatever  you think of Alex Ovechkin's cellys, it's clear that the yellow laces are not the culprit behind his mojo. Still, O'Brien remains one of the most entertaining players ever during stoppages, whether he's dancing to the Penn State version of Rock 'n Roll as performed by Section E or chirping from the penalty box.

Sometime late in the first period Saturday, I thought I had the goaltending situation all figured out. Matt Madrazo got the shutout Friday, his second in a row after blanking Towson on November 19th. He was great early on Saturday, playing his usual aggressive style. I started to get it in my head that I was going to use this platform as a coronation for the freshman.

Then, right as I decided to head down to the lobby to angle on Saad's pink-and-black jersey (can you tell I like the guy?)...bang, Chris Galgano pounces on a loose puck in the slot to tie it at 1. Then three minutes later, Brandon Weiner scored through a massive crowd in front. I actually had taken a position directly behind Madrazo for that goal, and trust me, he couldn't see a thing - credit Delaware with a tremendous screen. Then the second period started, and a bad outlet pass and a blown coverage later, another one is behind Madrazo. Seconds later, yet another, and still another after that. Three goals in 35 seconds, five in 6:46, and Madrazo found himself at the end of the bench.

Hume finished out a game that was already lost, and did fairly well (16 shots, 14 saves over the final 37:50), but not enough to stop the regression of the battle between the pipes back into muddy waters.

Defense-wise, it's a little frustrating. I think the group as a whole has made progress from the beginning of the year, but then you take a guy like Kevin Miller, who has been pretty steady all year, yet had a weekend he'd probably like to forget. On the other hand, you have the tandem of Rich O'Brien and Dan Loucks (the injury returnee I haven't mentioned yet) teaming up to prevent what looked like a sure goal on Delaware's first power play Saturday, when the game was 0-0. Carey Bell looked good to me as well. That seems pretty typical of the group to me - it's very up and down right now. Which is better than mostly down, as at the beginning of the year, I suppose.

Back to the positives. I have to say that in the face of an ugly game (both on the scoreboard and after the whistles) I was impressed with the Icers' refusal to quit on Saturday. In what was a 5-1 game late in the second, Penn State generated a lot of positive momentum, resulting in Saad's goal. Delaware's Nick Lepore crushed the comeback in its infancy with an answering marker shortly after, but still, guys like Loucks, Mark Polidor and Chris Pronchik in particular kept the energy going in a time of great distress. That will serve Penn State well somewhere down the road.

Finally, I might as well show off my haul from the jersey auction. Little kids and hockey moms beware - I will snipe you.