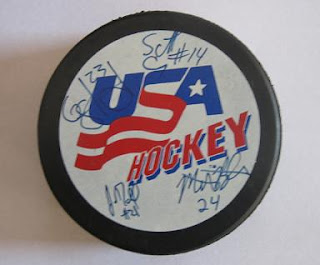 Cheesebag cross-promotion time: with the World University Games team exhibitions next week, I thought it would be a good time to drop this one: a USA Hockey puck signed by all four Penn Staters on the 2001 US University Select team that competed in Zakopane, Poland - the first team the ACHA sent to the event on behalf of USA Hockey.

The players: Greg Held, Mike Blevins, Josh Mandel and Scott Curry (who wore an A in Poland). They actually signed with their numbers for Team USA, which is kind of cool, although with the numbers being the same as their PSU numbers on three of the four, maybe it was just Curry making the effort there (he was No. 15 with the Icers). Essential stats: