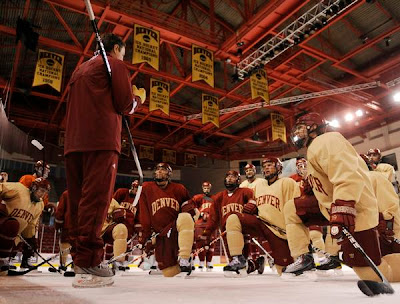 Second in a series taking uninformed, uneducated guesses at the candidates to become the first head coach of Penn State's NCAA men's team. The first was on current Icers coach Scott Balboni.

Would a national championship-winning coach who has been at one of the premier programs in the country for 17 years actually consider the Penn State job? According to some, yes he would.

George Gwozdecky's a guy that's been kicked around the rumor mill a few times, although not with quite the same intensity as Mark Johnson. But he's certainly been mentioned, going right back to the first day the position existed.


I saw one article stating that PSU had an "impressive list of candidates, including a current college head coach" that they were looking at. Today, I heard a rumor that the current college head coach they may be looking at is Denver head coach George Gwozdecky. That would certainly make sense, given that Gwozdecky was reportedly unhappy with his contract situation at Denver, and his name was weirdly floated as a candidate for the vacant Ohio State job. With Penn State potentially joining college hockey's strongest conference and Denver's situation a little less clear, there's perhaps a possibility that Penn State could steal him.


DU coach George Gwozdecky has four years remaining on the 12-year contract he signed in 2002. Coincidentally, 2014 could be the year Penn State will be ready to officially join Division I and become founding members of the proposed Big Ten hockey conference, along with Michigan, Michigan State, Ohio State, Wisconsin and Minnesota.

Please excuse my reach while I connect the dots.

Gwozdecky, who is seeking a new deal at DU, is/was a Big Ten guy, and you know Penn State is going to hire a veteran college coach with big-league roots and NCAA championship plaques on his walls. Gwozdecky, 57, could be that man. He won NCAA championships as a player at Wisconsin and an assistant coach at Michigan State.

That contract argument crashes and burns for the simple fact that we're hiring the coach in mid-2011, so a buyout is going to be required. Still, his name's out there.

Actually, Gwozdecky's appeal to me has very little to do with his bevy of accomplishments at Denver. While he did pull that program out of a two-decade funk, I look to the job he held right before moving out west, at Miami from 1989 through 1994. With the then-Redskins (program founded 1978), Gwozdecky took a program with an all-time 161-237-14 record to that point, and had them in their first-ever NCAA tournament in year four. What's more, he coached Enrico Blasi, a protege who would later coach under Gwozdecky at Denver, then take the reins of the Miami program and build on what Gwozdecky started, bringing the RedHawks to five consecutive NCAA tournaments, including a second-place finish in 2009.

Prior to Miami, Gwodecky's abbreviated resume looks something like this:
Basically, the guy's a winner. And has rumors surrounding him. Here's one more:


Prior to actual interviews, One runs a successful program, Big Ten background.

Take out Luongo, Smith and Daniels for not meeting the "successful" part of that. Lucia's coaching the flagship program in the hockey state. Jackson's program is building their own arena to keep him around. Berenson's obviously not coming. Blais is almost as unlikely. Osiecki won't bail after one year on the job. Owens, Motzko and Eaves are coaching their alma maters - I'm not saying nobody ever leaves their alma mater, but it does make it seem a lot less likely.

So who's left? A guy who hasn't left the state of Michigan in his entire career and a guy with proven career mobility, nothing to prove in his current job and a contract dispute. Hmmm...
Posted by Kyle Rossi at 8:49 AM