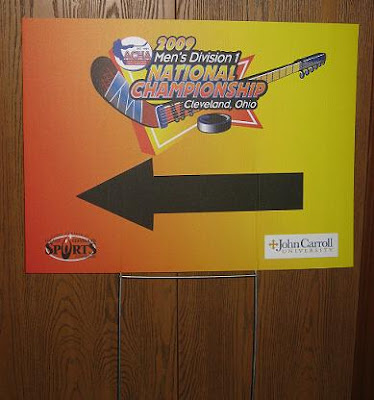 This is pretty much exactly what it looks like - a yard sign directing those attending the 2009 ACHA National Tournament to the available parking. You're welcome for the excellent shot of my faux wood closet door. Probably should've used a regular-wall background there. Oh well, lesson learned.

Here's how I acquired it: during the first intermission of the Lindenwood-Illinois championship game, I exited the rink, got in my car, and pulled up to the sign. I then opened my trunk and threw the sign in. Right about then, as I started to fancy myself Danny Ocean 3.0...THUD! My trunk won't close. THUD! THUD! THUD! Read that 17 more times, and you start to get the idea of how many times I tried to slam it shut before playing with the lever inside and finally getting it. I was extremely fortunate that it was dark and rainy out, minimizing witnesses. Back in the day, when the championship games were held on Sunday afternoons, I would've been busted.

Pretty sure I'm not going to be prosecuted for it. Is there any way yard sign theft has a statute of limitations longer than about 12 hours?

The 2009 tournament, of course, took place between March 14th and 18th and was co-hosted by John Carroll and the Greater Cleveland Sports Commission at the Gilmour Academy rink in Gates Mills, OH. Lindenwood won it - the Icers fell to Illinois in the semifinals, but not before beating Ohio in a thrilling overtime quarterfinal - but it will probably be best remembered for a carbon monoxide scare on the opening night of the tournament. Two first round games were pushed to the next day, which forced the cancellation of a couple of consolation games, and also caused a couple quarterfinals to be played on Monday the 16th, originally scheduled as an off day. Here's a convenient PDF visual aid for everything I just said.

I do really like the logo for this tournament, although that's probably a relative "like." They comply with that unwritten rule stating that an event taking place in Cleveland must use a guitar in the logo. Toss in Drew Carey and LeBron James and you'd pretty much have the only three two things anyone knows about Cleveland. At the very least, it's less bad than other ACHA National Tournament logos. Like the 2003 Division 2 logo for example: