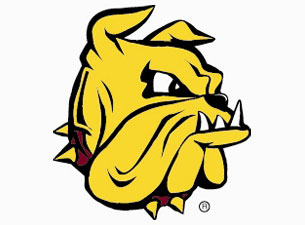 Like I said about a week ago, I'm going to bring this series to a close today and tomorrow since things are moving along quite nicely with the Pegula Center. The architects have been named, the construction team is coming shortly, and we even have a preliminary sketch to obsess over. In other words, it's quickly becoming pointless to jump around to different NCAA hockey venues, nitpick about suite locations and "feel" (both of which I do in this post as well, you won't be disappointed), and take uninformed guesses about what we should borrow from each. It's time to focus on our own rink, which I'm sure will be the best of all. With that out of the way...

What makes AMSOIL Arena unique? Well, for starters, how about the fact that Battista has said more about the new home of the Minnesota-Duluth Bulldogs in the media than any other venue on the tour? Yeah, okay, he was asked about it by a Duluth newspaper, so that doesn't really mean anything. Still:


“I liked everything I saw here – all of the amenities, the suites, the press box, the site lines. It’s the perfect size for us. I’m going to make it a point to get our (hockey) donor here to look at the building.”

It sounds like a return trip involving the guy who writes large checks was in order. While lip service to the Duluth newspaper about the Duluth rink is one thing, that's pretty telling.

Honestly, I came into writing this post with the idea of ripping AMSOIL to shreds, based on what I knew about it. Which, in fairness to myself, was mostly just the hideous seat-coloring pattern and the name. However, once I managed to get past those two things (it took a while), AMSOIL really started to grow on me. I highly recommend spending some quality time with the photo galleries on the Duluth Entertainment Convention Center (which includes AMSOIL Arena) site. The word "Galleries" just off the top right corner of the default picture is actually a menu, just to spare you my frustration.

What I like about AMSOIL Arena: A lot. My favorite part of all is the open concourse. Seriously. Get up, be able to watch the game while you walk, get your nachos, get back to your seat quickly because you no longer have to make your concession runs during intermission with everyone else. Brilliant. Hey, I like nachos, and sometimes these things can't wait until the scoreboard clock says it's time.

Actually, according to Battista, there are two concourses. But he does agree with me on the awesomeness of it all:

I also like the arrangement of the suites - I've been in the camp (assuming there are "camps" on this issue, I'm pretty sure there aren't, at least outside of the decision makers) that favors a ring of suites around the top of a single-tier seating bowl, but AMSOIL pulls off a different idea quite nicely. Looking specifically at Gallery 9 at the link above, it appears that they're all on one side above a press box, with possibly a few more in the corners.

The amenities are plentiful and top-notch. And while I don't see much there that wouldn't be in any other state-of-the-art hockey facility, AMSOIL is one of the few offering an in-depth look at things like the hydrotherapy room (seriously, go to the photo galleries). Plus, this look is accomplished without actually having to go to Duluth, as Battista did. Bonus points.

What I don't: Not a whole lot. My biggest issue is the presence of a true upper level which, as I've said before, seems unnecessary in a venue of this size. Maybe you need the upper level to have an open concourse, which I suppose makes sense. If necessary, I'm more than willing to make that trade - I'll have nice seats either way, not my problem. Also, AMSOIL just doesn't throw off a "classic, intimate hockey barn" vibe to me like some (well, two) of the other venues we've examined - it actually says "small version of a multi-purpose arena." Why? Well, for starters, it's because that's what it is. So says the official site:


We have greatly expanded opportunities to enjoy our UMD men’s and women’s hockey teams, as well as major entertainers, more conventions, larger trade shows, and other events.

"Major entertainers, more conventions, larger trade shows" is not likely to be much of a consideration for the Pegula Center, not with the Bryce Jordan Center right across the street. Hopefully this means some design differences that give the place more of a Steve Cady feel.
Posted by Kyle Rossi at 9:09 AM